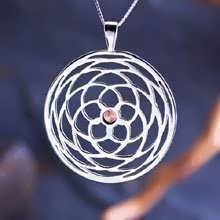 The Pattern of Venus Silver

Bring you the qualities of Venus using the pattern of its movement and making it when Venus is at its strongest influence.

The Pattern of Venus pendant is Inlaid with copper (the metal related to Venus) at the center.

The cycle of Venus
The relationship of Venus with the sun and the earth have the most beautiful and magical signature and because of this, it is considered the Queen of the Sky. Venus is our closest neighbor other than the Moon. Every 584 days she comes closer when she passes between the Earth and the Sun on her path around the Sun. At this moment, she creates a fifth of the wheel of the celestial zodiac and forms a pentagram of closeness.

From the point of view of the Earth, the Sun moves around the signs of the zodiac when Venus is moving around the sun and thereby creating her wondrous cycle over a period of eight years (the equivalent of 13 of Venus' years). The small rings are created when, from the Earth, Venus appears to be changing her direction (known in astrology as a recession).

Look at the numbers we mentioned – they form a Fibonacci series. The times of the cycles of Venus and Earth create a Golden Relationship that is known as the relationship that describes beauty and harmony in nature. The cyclical relationship between the Earth and Venus shows something of the quality that was always associated with that which Venus represents in astrology.

Venus is the universal symbol of fertility, beauty, relationships in general and intimacy in particular. Venus is the expression of our female aspect and creates compatibility, unity, and compromise. She characterizes the urge for connection, for merging, cooperation and flow, for pleasantness, softness and joy. She is also connected to a well developed aesthetic sense and artistic abilities.

The cycle of Venus reflects the shape of the spiraling five-pointed flower Venus makes in her orbits with the Earth and the Sun (every 8 years). This cosmic geometrical figure holds the vibration of the Venus-Earth connection and captures the essence and power of Venus. The pendant is created with the desire to bring love, beauty, intimacy, pleasure, sensuality, creativity and harmony to our daily lives.