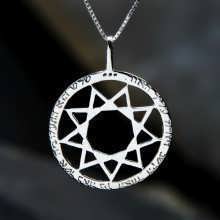 A Symbol of Unity of the Three Forces of the Universe

Understand the positive, negative, and neutral energies of the universe

"Three is the mystery, come from the great one"

The Enneagram symbol’s popularity is mostly due to Gurdjief's use of it to categorized psychological and spiritual human prototypes, but the symbol was known long before and can be found in ancient Kabbalah books.

The translation of the Hebrew engraving on the pendant is:
"Three is the mystery, come from the great one. Hear, and Light on thee will dawn".

The Enneagram gives the wearer a true understanding of the three forces of the universe.