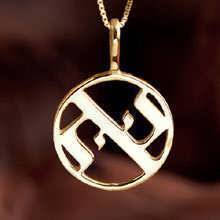 A Perfectly Harmonious Symbol of Love Received by Dvora Perlman

Bring the wearer a great sense of love and balance

The symbol in this pendant was created from the Hebrew word for love-"AHAVA". Hebrew is the holy language of the Old Testament scriptures The Hebrew language is a language with unique and strong kinetic attributes that influence our consciousness.

The symbol incorporated in this pendant consists of a number of elements. The first is the letter א (ALEPH), the first letter in the Hebrew alphabet. The shape of this letter clearly shows how the Creator's light is channeled down to meet the material dimension, is twisted and continues its journey as a reflected image, to create and to be created. "As it is above, so it shall be below." With the letter Aleph (א) we can see two occurrences of the letter "ה" (H) which symbolizes the creator. The letter is reflected both in its regular form and upside down. Also within the Aleph we see the letter "ב" (BET), the second letter of the Hebrew alphabet but the first letter to appear in the first chapter of the Old Testament – BERESHEET. This represents the process of the revelation of creation through its duality.

The symbol of AHAVA is a perfectly harmonious symbol that can be reversed and still appear the same. It teaches our consciousness the nature of sanctified love where the creator and the created, the container and the contents together create and balance one and the other in perfect harmony.

The symbol was revealed to the spirit of Dvora Pearlman in 2004 and is now revealed for the first time in the form of a pendant.