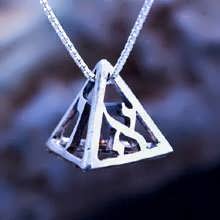 Tetrahedron with Hebrew letters VADAY which means confidence or sureness