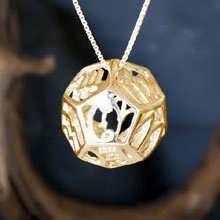 Dodecahedron (one of the platonic solids) with 12 zodiac signs - one on each facet.

Bring the wearer deep sense of connection with the cosmic order.