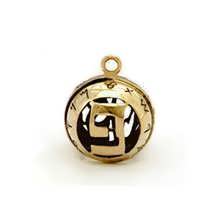 A Spiritual Symbol of Unity and Divination

Fill your life with integrity, divinity, and unity with your world

Here's an explanation of the different symbols that are concealed in this pendant.

There is a ring around the pendant on which the word "Beresheet" (Genesis) is engraved. This word is divided into two parts so that it creates a sentence in ancient Aramaic - "Bara sheet" = created six. This refers to the projection within the empty space to each of the six directions, to create the familiar 3D space thus the source of creation - The one that is known in the Kabbalah as the "Ein Sof" - The one that has no end created time and space.
On one side of the pendant appears the Hebrew word "Vayomer" (and God said) which represents the Idea that creation itself was made by the use of a divine thought being transmuted to the Hebrew alphabet and to words.
This idea can be found hidden on the other side of the pendant where there is the Hebrew letter "Pe" whose literal translation is the word "Mouth". It appears on the pendant in the same Assyrian Hebrew alphabet that 's being used to write the Torah. The interesting thing in the way it is written is that the missing part of the letter "Pe" creates another Hebrew letter-the letter "Beit".The second letter of the Hebrew alphabet and the first letter of the Torah and the word "Bereshit" - "Genesis" - the letter "Beit" literally means House or structure; So the infinite; The one source of creation related the finite materialistic universe with these sacred letters by a thought and a word - a vibration.
Near the outer ring, you can also see the 22 letters of the ancient Hebrew alphabet.
The concept of the use of words and sacred letters became a major part of The practical Kabbalah.
This is a powerful symbol of Oneness and Unity to achieve healing and spiritual realization.