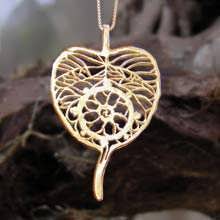 A Buddhist symbol of the Dharma - the middle way

A reminder of the ancient path that exists outside the cycle of aging, death, suffering, and rebirth

The Dharma Pendant design incorporates the Sacred Fig leaf which is known as the Buddhi Tree. Prince Siddhartha sat under this Tree for 49 days, attaining full awakening and liberation and became the Buddha.

A Buddhi tree actually grows outside the courtyard wall of my workshop. My neighbor once tried to destroy the tree, an example of great human ignorance which is the cause of all suffering… but the tree only grows bigger and stronger...

The symbol inside the leaf of the pendant is the 'Dharma wheel', also known as 'The Noble Eightfold Path'. The ancient path Siddhartha found is the way leading to the cessation of suffering (dukkha) and the achievement of self-awakening. It is used to develop insight into the true nature of phenomena (or reality) and to eradicate greed, hatred, and delusion. The Noble Eightfold Path is the fourth of the Buddha's four noble truths; the first element of the Noble Eightfold Path is, in turn, an understanding of the Four Noble Truths – which is understanding the true nature of reality and the cause of all suffering. It is also known as the "Middle path" or the "Middle Way".


My related personal story:
About a month ago I had a dream, a very symbolic dream. During the week before the dream, I spent time wondering whether our consciousness ceases to exist when we die or we simply assimilate our own identity with the "Oversoul" - a cosmic state of unity. I also had a conversation with someone about the way we accept our own "self", actually the way our consciousness works.

Then in this dream, I attended my own funeral, unseen. Someone from the crowd spoke and declared that I will be born again within 13 billion years.

Then I woke up.

It took me two more weeks to remember that the age of the universe, the world of phenomenon, is 13 billion years. Then I felt I got my answer - within this existence, in the cycle of constant birth and rebirth, we keep our "own" identity. However, when we get out of this endless cycle we assimilate with our true nature which is unity (hence "love everything and everyone") and shed our former identity as "you" or "David".