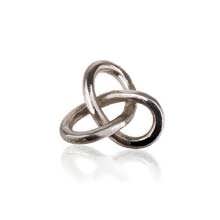 A Sacred Symbol of Oneness and Unity

Three are the circles of existence - light, chaos, and awareness

The Gordian Knot
This pendant is one of the most mysterious and enigmatic pieces I've ever made. Its simplistic design holds many important key models in the fields of mathematics and cosmology. It is known as a Torus Knot and it's the most basic knot which can be made on the Torus Tube. The Torus Tube is basically a structure of a donut or a sphere that turns into itself from one side and comes out the other in a perpetual motion. In a spiritual aspect, it symbolizes the cosmos, as well as infinity and it correlates to the sacred structures of the Seed of Life, the Flower of Life and even the Golden mean Spiral or the Fibonacci Spiral.

Over the years I received many responses, stories, and experiences from people who purchased this pendant. Many stories revolved around solving karmic problems, finding miraculous solutions, and even a few people reported that after they were free from whatever it was that held them back, the pendant disappeared, literally - they woke up in the morning and the string or chain were intact but the pendant was gone. Perhaps it has something to do with the mysterious way this piece came into existence.

The Gordian knot pendant symbolizes the idea of unity which binds everything into one.


My Personal story with the Gordian Knot
My personal story with this symbol happened in 2001. One of my clients went through a crisis when her son suddenly passed away. I went to visit and console her and on my way south I stopped at a shop to buy some music for the road these were the days before uploads, downloads, and youtube. The CD I purchased was “Who’s next” by The Who. In the bag I was carrying was a model of the triangular Torus Knot or Gordian Knot. I got the idea for the pendant from a friend of mine who was an acclaimed painter and gave me a printed drawing of the structure and insisted that I should make it as a pendant. When I asked him what it meant he wasn't able to provide any coherent answer...

On the way, It intrigued me, and I found myself contemplating on the meaning of this strange structure, and I recalled the story about Alexander the Great and the Gordian knot. The story is about king Gordias who created a knot and declared that the one who will be able to untie the knot will conquer all of Asia Minor. Many came and failed miserably that was until Alexander the Great arrived, took out his sword and cut it in a swift. This story indicates that sometimes the best solution is the most simple one and that the answer lies within us.

On my way south I opened the cover of the CD and inside was a booklet issued for the 30th anniversary of this record. I opened the booklet and the first thing that captured my eye was the words “The Gordian knot”. “This is interesting”, I thought. I played the CD and it opened with the electronic loop I knew from the song “Baba O’riley”. I knew this record by heart but this time something interesting happened. Images started running through my mind and I found myself experiencing a situation that occurred 30 years earlier. I saw the composer of this song, the guitar player Pete Townshend, sitting in front of an electronics device filled with buttons and plugs. In some way, I knew he was working on the opening tune for the song I was just listening to. The device he was using was some sort of a primitive synthesizer; he was inserting numbers and receiving sounds. Eventually, he entered the date of birth and death of a character knows as “Meher Baba” and the primitive synthesizer "emitted" a tune. Although I didn’t know who this character was more and more "data" appeared. First I thought of Persia and then of India, only to discover later on that he was born to a Persian family in India. This character that came out of those programmed tunes just made me laugh. I started laughing happily for no apparent reason.

The next morning I went to a store of another client. On one of the displays in the shop was a magazine and inside was an article with the title " stories of Meher Baba”. The story was about Buddha and his disciple Ananda, who asked Buddha to show him what "Maya"-the "great illusion" was.In the Story Buddha shows his disciple how his whole life and everything he experiences, including time itself, are a total illusion. Meher Baba claimed that he was the Avatar of the age. He referred to himself as "THE COSMIC JOKE" which is actually the way that all of us, being unaware of our true nature experience life in a state of separation from our one divine source. one of his most memorable phrases is "Don't worry, be happy". and years later I discovered that The entire album of "THE WHO" that was actually part of a project Pete Townshend was working on was inspired by the British 17th-century composer, Henry Purcell which one of his most famous compositions is called "The Gordian Knot Untied".....