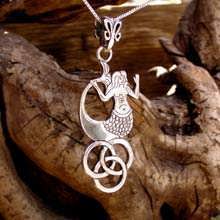 Symbol of The Water Element

Strengthen the Water Element in your life, to ability to accept and utilize change and to find harmony beauty and creativity -also a great symbol for a journey