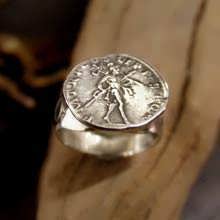 Igniting and directing emotional fires, it gives the power and motivation to take action in the world

Mars visits its fire sign, Aries, once in two years. There he ignites the passionate flames of active power, vitality and the raw and fresh energy of new beginnings. Mars in Aries invokes the warrior within us, the assertive power and fearless attitude towards life’s challenges, and the dynamic motivation for reaching our desired goals.

The election time features Mars in Aries rising on the eastern horizon. Mars is in a powerful oriental phase from the sun, rising before it in the eastern sky. Mars is in its own Sect (a nocturnal planet in a night chart). Mars is also in the same degree of its exaltation degree at Capricorn (28º) which indirectly activates its exaltation potential. Additional it is the hour of Jupiter, which also has rulership over the fire triplicity, and is also situated in the Sign of Aries himself.

Ring Elements
The top of the ring is a Replica of an Ancient Roman coin with the symbols of Mars on it.
On the two sides of the ring engraved the symbol of Mars.