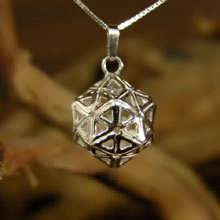 This beautiful sacred geometry structure is a combination between two of the Perfect Platonic Solids the Icosahedron and the Dodecahedron.

Each facet of a dodecahedron is actually a pentagon/pentad. The pentad was so revered by early Greek philosophers and the disciples of Pythagoras that its construction and it’s divine proportions were kept secret. The Pythagoreans used it as a symbol to recognize one another. They learned it’s relation to the Divine Proportion (The Golden Mean) which is one of nature’s basic mathematical/geometrical laws, and they discovered how this proportion affects the human psyche (we respond/react to this proportion as harmonious and beautiful with a deep tranquilizing effect).

This structure is considered by many as the structure of what is known as “The Human Consciousness Grid” and over the years I’ve received many responses and stories from all over the world telling me that the structure radiates subtle harmonious vibration and many claims that it has excellent healing characteristics, however the next story which took place during 2001 left me puzzled till this day.

Story from 2001
During that year, there were many attacks by suicide bombers in a certain area of Jerusalem. One day I received a phone call from a guy from Norway who told me that he saw my work and had to give me information regarding this specific pendant. curious, I invited him to my workshop and during the meeting, he told me that if I will place 30 pendants in different locations in Jerusalem the violence will end. Though I was skeptic I found myself a week later with a group of people from all around the world conducting a ceremony and a prayer for peace. After the ceremony, I gave each one of them one of the 30 pendants I brought with me.
The next day the attacks stopped. I never saw this person again and till this day I wonder if all of you out there wearing this symbol are not part of something much bigger on a cosmic level...