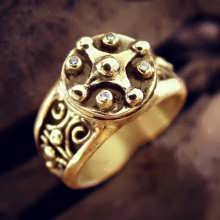 Sold Out!
This Talisman was originally designed for the rare and sold out edition of the Venus Transit Talisman (from the 6th of June 2012). After many requests, our astrologer found a unique opportunity to recreate them as a powerful Venus - Jupiter Solar Talismans.
These limited special edition talismans are assembled on December 4th 2014 between 21:11-22:13 GMT+3

This beautiful Trine which Venus makes to Jupiter is strongly ‘received’ by him as he is the ruler of the sign (Sagittarius) Venus is in. This harmonious meeting of the two naturally benefic planets, in fire signs, gives great joy and optimism, enthusiasm, winds of freedom and adventure. It will lighten up any situation, give strength, guidance and authority. Additionally, the Sun and Jupiter are In “mutual reception”, as the Sun is in Jupiters sign (Sagittarius), and Jupiter Is in the Sun’s sign (Leo).

The symbol of Venus is set with diamonds which is the stone symbolizing the traits of Venus, while the Sun symbol is set with a ruby.