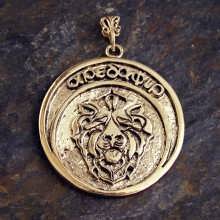 For Healing and Protection and for ease of Childbirth

This Mansion is considered one of the most healing of the Moon Mansions for every kind of ailment, it helps in protecting, maintaining and restoring bodily, as well as psychic, health, and is also said to help to ease childbirth in women.

The Picatrix tell us that this Talisman is to be created with the image of the head of a lion and above it should be written the name of its ruling spirit/angel “Aredafir” (which is written in Ancient Greek on the Talisman). The source also tells us that the Talisman can be placed inside water, or even food to help its healing virtues act internally:

“lift up sadness, slowness and infirmity from my body and from the body of whomsoever consumes food or drink in which this seal has been placed… and it shall be carried to the sick [person] or the infirm [person] shall wash it with another substance to be consumed against illness or for women (to ease of childbirth) or who have had a difficult birth”

What are the Moon Mansions?
As the Moon is the earth’s satellite, it is the fastest of all the celestial bodies, and therefore regulating the most daily and specific of astrological currents. Suppressed only by the much faster rotation of the earth on its axis (diurnal cycle) which is reflected by the astrological movement of the Asc (and the other angles) and the wheel of houses which is derived from it.

The doctrine of the Moon Mansions served as a tool to focus the astrological effects into more specific and defined life topics based on invoking the unique power of the Moon at every day of the month.

Like the Suns repeating annual cycle, which is reflected in the tropical zodiac wheel, at every point in the sky the Moon has an essential quality (relative to the zodiac and constellations) and effect which is activated, apart from its phase and aspects to other planets. In this way, the Moon Mansions are like a Lunar zodiac which derives its meaning from the Moon’s repeating orbit around the earth.

There are variations of this doctrine in different traditions, the Moon Mansions we use for our Talismans are based on the Picatrix which uses the Mansions in reference to the tropical zodiac.

The ancient knowledge regarding this series of talismans derived from The Picatrix - a composite work that synthesizes older works on magic and astrology. One of the most influential interpretations suggests it is to be regarded as a "handbook of talismanic magic", or celestial magic and was an important source of knowledge and influence on many scholars during the Renaissance.