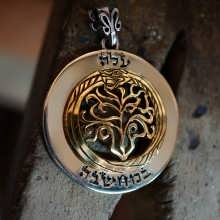 Created as a key of ascension to higher realms of reality

Use as a symbol to ascend to the higher realms of reality, and open the gates of the higher dimensions

The Key of Ascension Pendant.

This pendant and its symbolism were created as a key of ascension and a portal to the higher realms of reality.

At the center, I've placed the image of the Biblical burning bush. You will be able to notice the Hebrew letter "Shin" which can be found in many ancient amulets and symbolizes the first letter of the phrase "Shomer Ddaltot Israel" - Guardian of the doors of Israel, an ancient remedy for healing and protection. The burning bush symbolizes divinity, sacredness and the realm beyond time and matter.

The snake devouring its own tail is, of course, the ancient symbol of the Ouroboros. A symbol of rebirth, infinity, recreation, and divinity. The ancients used to see the snake shedding its skin and being born "again" and used this symbol to represent recreation, healing and so forth. It was during the vision of the burning bush in the desert, when Moses asked God to give him a sign, to be able to perform a miracle to the people of Israel, and God told him to transform his cane into a snake. The same symbol was used for healing during the wandering through the desert.

The two Hebrew words on the pendant are "ALA BA'MAKHSAVA" which can be translated as "rose or appeared in the thought".

This is creation is connected to the ancient source of the Jewish mysticism and is a powerful symbol of healing, divinity and a door that might take you to some interesting journeys outside this realm.


The story behind this design:
About a while ago I've encountered an experiment that was introduced by the late English theoretical physicist, cosmologist, and author, Stephen Hawking. This experiment which was actually a "remake" of an experiment that was conducted in the late 1970's and questioned the existence of our free will. In the experiment, it was shown how we actually "produce" a decision before our conscious mind even chooses anything at all. In other words, choices were actually predetermined.

This experiment sent me to another place and another time. To an ancient forgotten tale from the Babylonian Talmud. The Talmud literally means "instruction, learning". It was the centerpiece of the ancient Jewish cultural life and was foundational to "all Jewish thought and aspirations", serving also as "the guide for the daily life" of Jews.

The tale that I'm referring to is a forgotten one. Our protagonist is Moses. The story is about When Moses ascended to the heavens at Mount Sinai [to receive the Torah] and found God sitting and drawing crowns upon the letters (the Assyrian Hebrew alphabet contains unique thin decorative lines that are called "crowns" unlike the original ancient Phoenician fonts from the time of Moses). Moses said to God, “Master of the Universe, what is staying Your hand [from giving me the Torah unadorned]?”. God replied, “There is a man who will arise many generations in the future, his name is Akiva ben Yosef. He will interpret mound upon mound of halachot (laws) from each and every marking.” For those who don't know who Rabbi Akiva was, he was one of the greatest Tanaa’im (sages) in the land of Israel during the 2nd century CE, and when he was asked once if he can sum up the sacred Torah in one sentence he said “Veahavta Le’ reakha kamokha” - ”Love thy neighbor /friend as thyself”.

Back to the story and the peculiar/ interesting part.
After this answer, Moses requested, “Master of the Universe, show him to me.” God said, “Turn backward [and you will see him].” Moses [found himself in R. Akiva’s classroom where he sat at the back of the eighth row. However, he found out that he had no ability, or comprehension to understand what Akiva was teaching and was overwhelmed.

This forgotten tale has many interpretations, but this one interpretation intrigued me:
You see, according to the tale, our own free will is limited because we don't comprehend this infinite process of "cause and effect". The time and space continuum is described in this tale as a "thought" an infinite thought form that moves backward and forward and because of our limited comprehension and ability to grasp the past and the upcoming future events we experience everything as "good" or "bad". I've created this pendant as a key to the higher realms. These ancients symbols can act as a key during your own time of "silence" when you meditate, and at the same time there are endless hidden doors that can be opened with this key.