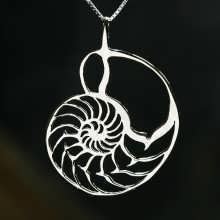 A Symbol of Nature's Beauty

"The key to the physics of the universe"
Plato

The pendant is based on the structure of the Nautilus shell. The Nautilus shell is one of the known shapes that represent the golden mean number. The golden mean number is also known as PHI - 1.6180339... The PHI is a number without an arithmetic solution, the digit simply continues for an eternity without repeating itself. The uniqueness of the golden mean is that it can be found in all living forms such as the human skeleton or the shell of a Sunflower. Plato called this value - "The key to the physics of the universe".

The Golden Mean number is widely used in art, architecture and religious symbols. Artists like Da Vinci and Kandinsky have used the golden mean in their paintings.

Researchers found that humans will consider beautiful an artwork, architecture and even a face that has the golden mean proportions.

The nautilus shell is made to symbolize the inner beauty of nature.