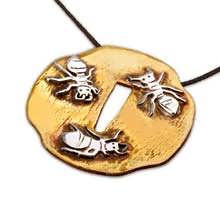 The Ant Tsuba
The Tsuba reflects a moment in consciousness in accordance with the tradition of Haiku poetry. The Ants represent diligence and communication.