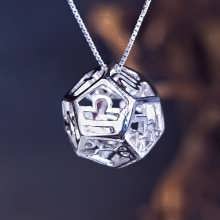 "Within this lower world a spiritual nature is concealed that can operate through geometry, which is vitalized through the geometrical and harmonic connections, originating in an interior urge implanted by the Creator, and which inspires and motivates the use of these powers."
Johann Keppler

The current series of pendants was made on JUNE the 21st between 14:26 -15:20 on the solstice which is the longest day of the year. It is the day when the Sun's apparent position in the sky reaches its northernmost or southernmost extremes. And it symbolizes life's force at its peak.