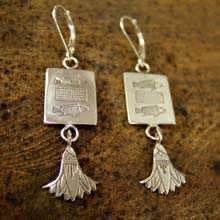 The Pisces EarringsThe ancient Egyptian symbols depicted in the jewel are the Egyptian zodiac sign for Pisces. The ancient Egyptians used Decanic Astrology in which the zodiac signs were further subdivided into periods of 10 days. Small planetary changes in these periods hold special astrological significance.

The symbols and the horoscope as we know it today, make use of the specific time of birth and the astral configuration at the time of birth. This concept was brought to Egypt in the first century from Greece and from there spread to the rest of the world. The basic idea in this concept is that each human being has a fate or a special quality. This concept coincides well with Egyptian culture, which believed that our purpose in life is to fulfill our destiny and prepare for the next world.

I used the symbol of the Egyptian lotus flower which symbolizes the eternity of the soul and the cycle of life and rebirth, illustrated by the fact that the lotus sinks underwater at night and rises again every morning.

The jewel is designed to remind the wearer to find it's destiny and strive to fulfill it.