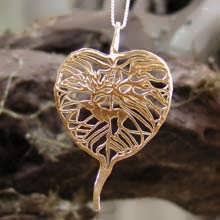 The Awakening Pendant
I teach one thing and one thing only, that is: suffering and the end of suffering.

The awakening pendant design incorporates the Sacred Fig leaf which is known as The Buddhi Tree. Prince Siddhartha sat under it for 49 days and attained full awakening and liberation, becoming the Buddha.

Inside the leaf pattern appears the symbol of a deer .
The Symbol of the deer refers to the Deer Park in Sarnath, near Vārānasī (Benares) in northern India. There the Buddha set in motion the Wheel of Dharma when he delivered his first sermon to a group of five companions with whom he had previously sought enlightenment. Together with the Buddha they formed the first sangha, the company of Buddhist monks, and hence, the first formation of the Triple Gem (Buddha, Dharma and Sangha) was completed.


My personal related story:
The first piece of jewelry I ever made was a bracelet with an image of a deer. I created it years ago. What really took me by surprise was the fact that all the images and visions I had prior to and after making this piece were Buddhist symbols. Five or six years earlier I had met a woman who claimed she could clean Karmic patterns. Though I was skeptical I decided to give it a try out of curiosity. She gave me a sheet of paper on which was written different questions. One of the questions was "Do you want to fulfill your destiny in this lifetime?" It looked ridiculous but I wrote "yes".
During my session with her I had a strange vision of "three jewels" only to find years later that these are the "Three Jewels" of Buddhism which are The Buddha – the awakened one; The Dharma -the teachings of The Buddha; The Sangha - the community of those who have attained enlightenment and help a practicing Buddhist to do the same. The Sangha is also used more broadly to refer to the community of practicing Buddhists.