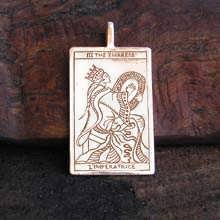 The Pendant is based on the Tarot Card series by Karyn Easton.

The fourth card in the major arcana is the Empress Card. It is customary to number it as card number 3.
The Empress represents the archetype of the Mother, who creates life and nurtures. Different card decks represent the Empress as a fertility goddess from all the cultures of the world, the female creator element. Sometimes the Empress is the womb in which creation develops until it is ready to come out into the world. In many cards, she is described as pregnant.

The Empress is Mother Earth and the giver of earthly gifts. It is the life power and the giver of life to all. The power of The Empress is the basic power of life that is beyond the intellect. This is the natural and instinctive nourishing power of mother earth that gives life to all sentient beings in a completely unknown and uncalculated process. Every being that incarnates, develops in her and is born through her. She is the approachable and friendly aspect of the female archetype. She is mothering. She is love and compassion, the symbol of sexuality and feeling. She is the great mother that represents the beginning of life, the power of life that brings change and renewal. She represents the creation of life on all its levels.

At the time of a Tarot reading, The Empress card is very positive one. It represents fertility, success, and prosperity. This is true in all aspects of life: love, art or business. The message that the card holds for us, is to apply in our lives all the principles that it represents. We have to be fertile, and learn to connect to the creative power within us.

This card tells the Querent to invest in supporting and nourishing the very matter upon which he asked the question. One must be open-minded and allow it to grow, to nourish it and give it time to mature until it is ready to be born. The card may represent the process of maturing of an idea or a project. The Empress is she that gives the idea life.

The Empress represents the mother in the physical and simple sense as well. It can symbolize the relationship between the Querent and his/her mother. In addition, the Empress card can indicate pregnancy and symbolize fertility