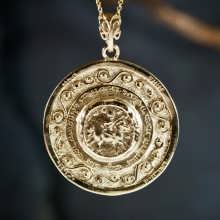 Journey of Life Pendant Gold (Round)