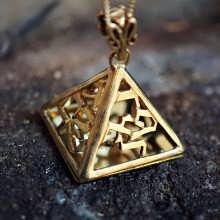 Comprised of four facets, each carrying one of the names of the four angels and engraved with the name of the bearer of the Talisman and his/her mother name.

Engraved with the name of the bearer of the Talisman and his/her mother name.

The Hebrew word for Angel is Mal’akh, and it literally means messenger. An archangel in these traditions is a supernatural being which acts as an intermediary between the Creator and humanity. Other roles that can be found in the ancient myths are protection and guidance, as well as carrying out God’s will.

There are ten different hierarchies of angels found in the Jewish tradition, and for this amulet, I’ve used these four because of the various unique role of each one.

The Four Angels amulet design consist of four facets, each carrying one of the names of the four archangels. Each one of these archangels stands on one side of God’s throne with the divine spirit at the center.

The four archangels are:
Michael (Mikha’el in the original Hebrew version) which represents God’s kindness and stands up for the children of mankind.

Gabriel (Gavriel in Hebrew meaning “God is my strength”) who performs acts of justice and power.

Raphael (meaning, “it is God who heals”) who represents God’s healing forces.

Uriel (meaning “God is my light”) who leads us to our destiny.

These four angels are mentioned in the “Kriat Shema” prayer.

To my right Michael,
to my left Gabriel,
in front of me Uriel,
behind me Raphael,
and over my head God's Shekhinah
(From the Jewish Kriat Shema, a prayer recited before the Shema Yisrael when going to sleep).

At the center/bottom of the pendant, there is an engraving in the same original Assyrian Hebrew fonts of the Torah with the name of the owner of the talisman and the name of his/her mother. This type of engraving can be found in special healing and protective ancient amulets.