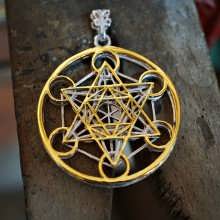 Why was this structure so important and secretive? The reason is in its potential. If we connect all the possible centers of the circles we will receive 78 lines, creating a structure known as Metatron’s Cube. This structure contains bi-dimensional drawings of all the 5 Platonic Solids: the cube, the tetrahedron, the octahedron, the dodecahedron and the Icosahedron. These structures are unique in having all their vertexes tangent with the surface of a sphere. These structures and their different combinations create every possible molecular structure and every possible geometrical law, basically creating the unseen pattern behind the reality we live in.

It is interesting to see how, for example, the Pythagoreans used one of the five platonic solids The Dodecahedron. Each facet of a dodecahedron is actually a pentagon/pentad. The pentad was so revered to early Greek philosophers and the disciples of Pythagoras that its construction and its divine proportions were kept secret. The Pythagoreans used it as a symbol to recognize one another. They learned it’s relation to the Divine Proportion (The Golden Mean) which is one of nature’s basic mathematical/geometrical laws, and they discovered how this proportion affects the human psyche (we respond/react to this proportion as harmonious and beautiful with a deep tranquilizing effect).