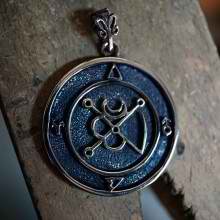 Limited Edition. assembled on July 2nd 2022. A Talisman for new beginnings, and rekindling the inner fire.

The election time features Mars in Aries rising on the eastern horizon. Mars is in a powerful oriental phase from the sun, rising before it in the eastern sky. Mars is in its own Sect (a nocturnal planet in a night chart). Mars is also in the same degree of its exaltation degree at Capricorn (28º) which indirectly activates its exaltation potential. Additional it is the hour of Jupiter, which also has rulership over the fire triplicity, and is also situated in the Sign of Aries himself.