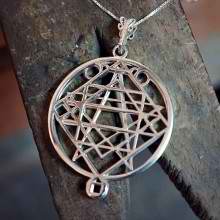 Symbol of fullness. Contains symbolism like the Monad, Triangle, Square, and Pentad.

Connect and awake within us the divine spark and cosmic creation

The symbol itself contains endless concepts which were derived directly from the ancient Greek philosophy. The diagram contains the Monad (the point). The beginning, the focal point of creation. Which is also the “Bythus” - the unknown and unknowable Father.
Then we have the triangle - derived from the monad - the point and from it came the pair or Duad which represents “Mind” and “Truth”.
Next, we have the square which represents the Logos (word, cosmic thought), the “Anthropos” - ”Man, and the two female aspects of “LIFE” ( Zoe) and Ekklesia - ”The Church of Assembly”.
So we have the SEVEN - the triangle which represents Spirit and the Square which represents matter. You can also find the Pentad and the concept of order and chaos in this symbol and much more. These are just some of the hidden symbols of the Pleroma.

Many of these ideas and teachings can actually be found in the teachings of Pythagoras.

The Pleroma concept can be found in Gnosticism and in the esoteric traditions that can be found in the Apocrypha - which are works which were not accepted in the canon of the Judeo - Christian religious scriptures. Many of these writings were considered sacred at first, but later for various reasons were excluded.

Gnostic myths describe the Pleroma as a spiritual realm or the primordial cosmos which was all infinite light. This perfect realm was disrupted by a fall when a subordinate god fell from the heavens and created the physical realm or the material world. Known as the Demiurge (again from Greek - meaning craftsman) this false god arranges the physical world to make it conform to a rational and eternal ideal. The real source of creation or the Pleroma remained as a spark which existed in the materialistic world and in each human being, while the Demiurge sought to prevent gnostics from discovering their past origins, present powers, and future destinies. That is why according to the Gnostic faith all of us are tied to the material world unaware of our real source and ability.

This concept can be found in the story of Adam and Eve, In the Kabbalah and of course in the Gnostic writings such as the Nag Hammadi scriptures/ The Gospel of Thomas that was discovered in Egypt in 1945.

The Gnostics believed that they contain within themselves divine sparks expelled from the Pleroma and that Christ was sent from the Pleroma to teach gnostics the saving knowledge (gnosis) of their true identities. These beliefs were revived by the Cathars (the “pure ones”) in southern Europe between the 12th -14th century. They had the same dualistic approach of two deities - good vs evil. They claimed that the good God's power to do good was limited by the evil God's works and vice versa in a sort of a Yin Yang concept. All matter, including our human body, was created by the demiurge, and, the human beings were actually angels seduced by this false creator to fight against the army of archangel Michael and after their defeat, they were forced to spend an eternity trapped in the material realm. The Cathars believed that in order to regain angelic status one had to renounce the material self completely. Until one was prepared to do so, he/she would be stuck in a cycle of reincarnation, condemned to live on the material world - a concept similar to the concept to Buddhism.

As one can see the Gnostic myth contains a lot of spiritual concepts that can be found in many religious sects throughout history.