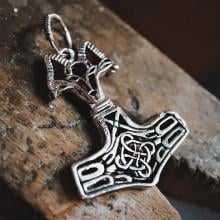 Mjölnir was a symbol of protection and cosmic order and a symbol of defence against the forces of evil and chaos.

A symbol of protection against chaos, blessing and fertility

A few months ago a good friend of mine who was going through a tough divorce told me that while spending some quality time with his young daughter he began telling her tales from the Nordic mythology. He's daughter liked these stories, especially those about Thor, the God of Thunder.

Unlike the unfortunate comics franchise, the Nordic tales actually revolved around deep symbolism, proverbs, ancient wisdom, and even philosophy. For example, during a set of heroic trials, Thor was forced to fight an old woman. To his surprise, he couldn't defeat her, because the old woman was a representation of old age and no one is able to fight it.

As for my friend, he literally found the ancient sources and translations of the stories. After reading these stories, he asked me if I could design and create a Mjölnir talisman. Despite the fact that I don't have enough time to take custom orders, I agreed, because of his current situation, and after weeks I finally finished creating the pieces based on some ancient talismans that were found in excavations.

The model was finished during this time of quarantine when most of us cannot travel, and long-distance journies to magical places are restricted, that is why I think it's a perfect symbol for two reasons:
The first one is that the Thor's Hammer - The Mjölnir was a symbol of protection and symbolized among other things the cosmic order and a symbol of defence against the forces of evil and chaos.
The second thing is that the Vikings were a nation of seamen, sailing across the ocean in their glorious Dragon ships, so it is a symbol of protection during one's journey against all sorts of evil, mayhem, and calamity.

The origin of Thor's hammer is very ancient. The Viking name Mjölnir can be found in the Old Slavic word mlunuji, Russian molnija, and Welsh mellt, all of which means “lightning”. The hammer was created as a weapon to defend Asgard the world/kingdom of the gods from the giants. The historian of religion Mircea Eliade discusses in The Sacred and the Profane, "One of the universal patterns in human consciousness is the concept of the cosmos, a realm defined by sacred time and space, and chaos, a realm defined by profane (ordinary) time and space. The cosmos is typically envisioned as a circle, an island in a sea of chaos".

In Norse mythology, cosmos and chaos were called, respectively, Innangard and Utangard. Asgard, is the homeland/realm of the gods, while Midgard, is our human world. The word "Gard" in ancient Nordic languages can be translated as a "fortress" or a boundary that protects the realm from the outside chaos. The hammer was, therefore, a symbol of protection against chaos. It was also a symbol of blessing and fertility as the lightning and thunder bring rain which fertilizes the ground and of course is the key part of agriculture and life itself. Therefore the hammer which symbolizes the sound of thunder was used to bless births and marriages.

Huge hammers were kept in one of Thor’s temples in Sweden, and during the ritual, people were beating the ceremonial hammers against huge drums to mimic the sound of Thunder This was used to ward off hostile spirits.

The talisman itself is based on ancient Viking motifs that were found on these ancient amulets, and the goat motif on both sides of the pendant represents the two goats that used to carry Thor's carriage.