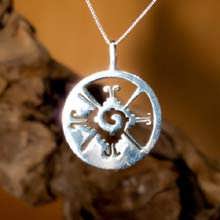 
The Hunab Ku pendant represents the symbol of the Creator God in the Mayan culture. The meaning of the name Hunab Ku is “The Only God”. In Mayan mythology, Hunab Ku is related to the Creator God – Itzamna. The Mayans were very advanced in mathematics. They also believed that the entire universe is comprised of awareness and consciousness that they called Hunab Ku and it is this consciousness upon which all the mathematical laws of the universe operates.

The Mayans separate time into periods of 13 days. Instead of the common linear understanding of years, months, weeks, Mayan calendars understand time as a spiral a rolling wave.  A wave is composed of 13 tones or days that steadily unfurl. How we observe these waves and geometric shapes of time unfolding influences the way we conduct ourselves in this reality. Instead of relating to this idea that days are simply mundane moments in time, every day represents a deeply symbolic color, tone, and rhythm.

The energy of the entire Universe emerges from the center of the cosmos. Different religions and cultures call this universal center by different names; Tibetans call it Mount Mero and Mayans call it Hunab Ku. From within the Hunab Ku a pure energy emerges and radiates to the entire cosmos. The energy arriving from the center of the cosmos to Earth in this solar system does not arrive directly because it does not have a direct route to our planet. Rather, energy from the cosmic center arrives at the Sun and all sorts of other stars and planets first. The celestial bodies that this pure energy passes through transforms the energy into energy with the unique qualities of the celestial body and the energy is then reflected to Earth.