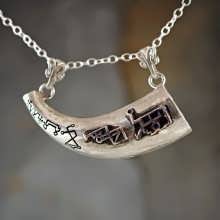 The Talisman is said to guide one to the ”Treasure”, bring abundance, success, power of attraction and charisma.

Rare and Powerful Venus in Taurus and Moon in Pisces (exalted mutual reception)
Limited Edition was Assembled on 13th of April 2018 between 06:38-07:35 GMT+3 while Venus was in Taurus on the day of Venus and the Hour of Venus.

The time selected for the creation of this talisman has Venus rising in the east In her sign of Taurus, on her planetary day and hour, while harmoniously aspected (sextile) by the Moon in Pisces from the very beneficial 11th house. Venus is also harmoniously aspecting (trine) the powerful exalted Mars in Capricorn, ruler of the 7 house of partnership - rendering this talisman as even more powerful in love, sexuality, and attraction. Venus and the Moon are in mutual reception! By exaltation (Moon exalted in Taurus and Venus in Pisces).

This is a Talisman for all the Venusian gifts in Taurus, the gift of plenty and abundance, the gift of sensuality and attraction, the gifts of beauty and pleasure, artistic ability and a general feeling of well being.

In the Venus Horn Talisman, the earthly power (Taurus) of Venus is greatly emphasized, it gives all of what Venus naturally signifies (love, beauty, attraction etc.) with a tremendous support for gaining resources and abundance. It amplifies pleasure, artistic ability, and stress-reducing tranquility.

The design of the Talisman comes from the famous 16th century Magus John Dee, who was a Philosopher, Astrologer, Alchemist and an adviser to Queen Elizabeth I.

In a Magical text entitled “The Little Book of Black Venus” Dee gives this complicated design for a Venus Talisman, with many sigils of her spiritual hierarchy. He then gives a very long and elaborate ritualistic protocol for the creation of this Talisman, while also using a real bull’s horn. In our creation, I will create a silver or gold horn-shaped Talisman and follow the ancient traditional methods and consecrate this Talisman under the Venusian election stated above.

The Horn is, of course, the famous “horn of plenty” which is the symbol of good fortune and abundance. It's a horn of a bull which is one of the sacred animals ruled by Venus (as is the sign Taurus). The sigils are of the different spirits and intelligence (or spiritual powers) connected with Venus cosmic archetype.