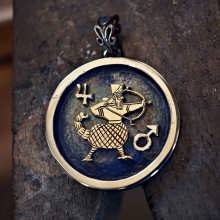 This Talisman helps us gain inner and outer power, becoming victorious over any obstacles or opponents that come in our way

The Talisman of Power and Victory.

Mars, which has entered his heavenly domicile of Scorpio about a month ago, joining Jupiter who has been there since October. In Scorpio Mars can claim back his natural strength and act independently empowered by his unique passionate power. The conjunction of Mars and Jupiter in Scorpio augurs the ‘Heroic’ archetype, giving tremendous energy and power to conquer anything one aspires too. It gives courage and steadfast intense energy which also helps conquer one's deepest fears and transform them into raw power.

This conjunction can act exoterically and esoterically, it can give an intense charge of intentional energy and focus on helping one achieve his goals, success, and fame in the world. It also acts esoterically In giving one a penetrative power into mystical and magical realms. The power to Journey within and bring light into a deep and hidden part of the soul.

This Talisman helps us gain inner and outer power, becoming victorious over any obstacles or opponents that come our way.

“Jupiter and Mars make glorious characters, friends of the great or of kings, distinguished governors and receivers of stipends, those making a career in public affairs or in campaigns, and those considered worthy of honor and status”
From Vettius Valens, Anthologies, Book I (2nd-century Hellenistic astrologer)

The figure on the Talisman is the Babylonian Scorpio-man which is considered a guardian and protective being (In Babylonian myth he is protecting the Sun god Shamash). This figure is also called Pabilsag in Akkadian and refers to the hybrid of the constellation of Sagittarius and Scorpio. These are the signs of Jupiter and Mars, Therefore it is also an emblem for their combined powers.


About Mars
Mars rules the signs Aries and Scorpio, which reflect different sides of its nature, Aries is much more outgoing and energetically expressive, while Scorpio is more emotionally deep and intense.
Traditionally Mars is considered a nocturnal planet, and he prefers his nocturnal Sign Scorpio where he is said to express his more refined qualities. Mars was considered to be the star of power and people turned to Mars to gain courage, fighting spirit, initiative, and energy.


About Jupiter
Jupiter has always been considered to be the ‘great benefactor’. It is the largest planet in our solar system and presides over the principles of expansion growth and synthesis. Jupiter brings us the gifts of abundance and success and provides us with spiritual guidance, support, and protection. Jupiter is also the planet that influences the higher faculties of the mind, our ability to synthesize and to have a deep understanding of concepts and experiences. Because of this, Jupiter rules philosophy, religion (in the open and liberal sense) and spiritual insight. Jupiter also controls moral ethics and justice and our inherent capability to discern between good and bad. People who were born when Jupiter was strong, are always seeking the truth, justice, and faith in life. They are teachers, visionaries, and word spreaders.

In Indian astrology, the name for Jupiter is 'guru' which means guide or teacher. Jupiter is a guide for wisdom and expansion of consciousness, it lifts our spirit with joy, enthusiasm and optimism give us a feeling of the magic in life and the gentle guiding hand of fate. Most important, Jupiter's influence helps us trust in our path and above all have hope!

The magus Cornelius Agrippa writes on talismans for Jupiter:
“...From the operations of Jupiter, they made for prolongation of life...increaseth felicity, riches, honor and conferreth benevolence and prosperity, and frees from enemies gives a religious and glorious life and advancement of fortune.”