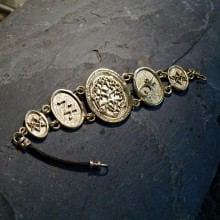 Based on the rich emblems and mysterious symbolism of ancient Alchemy

The Alchemical Cosmic Tree Bracelet is a unique symbolic piece. The inspiration for this design came from the rich emblems and mysterious symbolism of ancient Alchemy.

Note: The length of the bracelet will be adjusted by your wrist circumference (please provide in the order form or by email after the order).

The symbol at the middle of the bracelet is the Alchemical Cosmic Tree, with the symbols of the seven planets that were known in the ancient world. The Alchemical Tree symbolizes the perfect balance between its cosmic branches and roots which symbolizing the alchemical concepts of "AS ABOVE, SO BElOW", a concept that can be found at the enigmatic and mysterious Emerald Tablet of Hermes Trismegistus.

The text is part of the ancient Hermetic tradition texts, which can be traced back in time to ancient Egypt and Greece. These texts which are the foundation of alchemy, revolve around a mysterious figure known as Hermes Trismegistus, a combination of the Egyptian god of wisdom Thoth, and the Greek god Hermes. The writings known as the Corpus Hermeticum, discuss the nature of the universe, nature, the mind etc.

The Alchemists
The alchemists were looking for the Prima Materia - the base of all matter and existence which is formless and beyond definition (that is the reason for the endless similes in the Alchemical language). The Prima Materia or the Aether is also described by the ancient alchemists as the Anima Mundi or the “World Soul”. It is the soul, or oneness that connects everything and IS everything.

They believed it to be the secret recipe for the creation of what is known as “The Philosopher’s Stone” - a substance that is said to possess the power of transmutation of matter (such as turning lead to gold) and give immortality and rejuvenation. It is also known as The Elixir of Life, and that is the meaning of the inscription in Latin around the tree motif in the bracelet. The inscription says: “Visita Interiora Terrae Rectificando Invenies Occultum Lapidem” - “Visit the interior of the earth and rectifying (purifying) you will find the hidden stone”. The motto originated in L’Azoth des Philosophes by the 15th Century alchemist Basilius Valentinus.

The last symbol on both sides of the bracelet is the unicursal hexagram. The word “unicursal” simply means ‘to draw using a single continuous line’. So, you can draw a unicursal hexagram using one line only, thus symbolizing the unity behind everything in existence. A hexagram is a six-pointed star created by placing two equilateral triangles onto each other in a concentric manner (in a way that they would have the same central point), in that way it symbolizes the unity and harmony between feminine and masculine as opposites.

The union of physical and spiritual realms
The Hermetic concept of “As above, so below” - everything that happens in one reality (microcosm) reflects in other realities at all levels (macrocosm) and therefore, one can understand the universe and the larger concepts by understanding the smaller systems comprising it.

The Seven ancient planets that were known as the Chaldean order, which are the Moon, Mercury, Venus, Jupiter, Saturn, Mars and Sun are represented by the seven points and the central point of the hexagram in astrology.