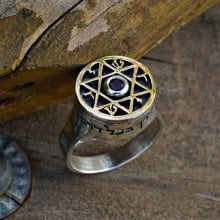 Based on ancient Kabbalah remedies and Vedic traditions

An ancient remedy for success and protection

The Five Metals Ring is an ancient remedy for success and protection which can be found in the Jewish mysticism and Kabbalah remedies and also in the ancient Vedic traditions.

The origin of the five metals concept is the ancient Panchaloha (which means "five metals" in Sanskrit) which is a traditional five-metal alloy, which is considered sacred in the Hindu tradition. The composition is laid down in the ancient Shilpa Shastras, a collection of ancient texts that describe arts, crafts, and their design rules, principles and standards.

"Shilpani, works of art of man,
imitate the divine forms,
by employing their rhythms,
they metrically reconstitute,
and interpret the limitless knowledge,
of the sacred hymns,
from the limits of being human."
Aitareya Brahmana, Rig Veda, 6.5.27

The five metals are gold, silver, copper, iron, and zinc.

This ancient remedy was probably adopted by ancient Jewish travellers or merchants and found its way into ancient Kabbalah remedies.

The ring itself can be made only once or twice each month during the first half of the lunar phases (as the moon becomes fuller), during Saturday, from nightfall till dawn, which is considered a special time, when one can focus his/her intentions and ask for blessings and success.

The ring is adorned with a Star of David which is an ancient symbol of protection and the balance between the spiritual and matter among other things. The letters on top of the ring inside the Star of David are "Shin, Dalet, and Yod" which are the initials of the phrase "Shomer Daltot Israel" - The guardian of the doors of Israel, while the engraving around the top of the ring was taken from Psalm 91/11 "For he will command his angels concerning you to guard you in all your ways".
Both sentences are ancient remedies for protection.