Italian writer-journalist Roberto Saviano is all praises for his “ring of courage.” Considered a powerful tool for overcoming one’s fears, Saviano wore the ring during his brave and controversial exposes about Camorra, a well-connected Neapolitan Mafia-like organization. The “ring of courage” can be found at www.Ka-Gold-Jewelry.com


(Givataim, Israel, October 5, 2009) - Famed Italian writer-journalist Roberto Saviano was all praises for his silver “ring of courage,” which he considered a powerful and effective tool that helped him overcome his fears. Saviano, who collaborates with La Repubblica and L’Espresso, is best known for his daring and controversial exposes about the well-connected Neapolitan mafia-like organization called Camorra and for the ominous threats made against his life.

In an interview, Saviano talked about the experiences he had to go through in order to collate as much information about Camorra and its connections as possible. He was also seen wearing his silver “ring of courage,” the very same ring that can be found on popular cosmic jewelry website Ka Gold Jewelry (www.Ka-Gold-Jewelry.com) as well as the “Ana Becoach” ring, which can also be found on the same website.

The ring of courage seen at www.Ka-Gold-Jewelry.com has Hebrew text engraved on it which explains that fear comes from ignorance.

Ka Gold Jewelry designer David Weitzman explains: “My idea for this ring of courage came from the novel Dune from the Bene Gesserit Litany Against Fear. Fear twists your real perception and judgment. Fear causes one to become blind to the beauty and abundance of life. Hence, the fearful one will have deceitful thoughts and feelings.”

By wearing the ring of courage, however, Weitzman says that it will “remind you of the great courage that is within you.” Such is the case with Saviano, Weitzman says, because the Italian journalist overcame his fear and continued with his brave exposes.

In the same interview, Saviano also relayed his meeting with Israeli President Shimon Peres. According to the Italian journalist, Peres asked him what the ring was and where he got them. In response, Saviano offered to purchase similar rings for the Israeli President.

“I think that says a whole lot about Saviano and his bond with the rings, so to speak. He has belief on the rings’ power and influence,” Weitzman underscored.

Reportedly, Saviano also bought rings of courage for his bodyguards. He bought the rings in a shop in Rome, which sells Ka Gold Jewelry pieces.

To date, Saviano and his work has been praised by many, including author-philosopher Umberto Eco who him a “national hero.”

For a video of Roberto Saviano’s TV guesting wherein he cited the ring of courage, you may check www.youtube.com/watch?v=efsEdvcSYGA&feature=player_embedded 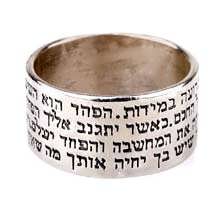 The ring of courage, along with all other unique and effective cosmic jewelry pieces, are designed by Weitzman for www.Ka-Gold-Jewelry.com Weitzman is known for his passion for sacred knowledge, positive change, spiritual symbols, strength, healing and various talismans. A self-described truth seeker, the renowned jewelry designer gained worldwide recognition following his first designed released in 1998. Weitzman has studied the fields of Judaism, Buddhism, Kabbalah, ancient wisdom and eastern spirituality. More of Weitzman’s works as well as his personal blog wherein he shares the various stages of jewelry design can be found at www.Ka-Gold-Jewelry.com

The silver ring of courage is sold for only $59.00 Ka Gold Jewelry also offers free EMS shipping for orders above $150.00. To see how the ring of courage looks like, Weitzman advises interested parties to check www.ka-gold-jewelry.com/p-products/ring-of-courage-silver.php

For more information about Ka Gold Jewelry designed by David Weitzman, visit their site at www.ka-gold-jewelry.com or send email to  [email protected]

Ka Gold Jewelry by David Weitzman is a jewelry website that mixes sacred science, art, and spirit to create designs that reveal the truth about people’s identity and the true nature of reality. Behind these sacred symbols for healing, self-balance and unity is the knowledge that enables people to take complete control over their lives so they can rid themselves of chaos, fear, and hatred that affect so many people.

For authentic sacred jewelry and talismans, Ka Gold Jewelry is the perfect one stop shop! For more information, visit www.ka-gold-jewelry.com or send email to [email protected]

Born in Naples on September 22, 1979, Roberto Saviano collaborates with L’Espresso and La Repubblica as well as with other magazines including Nuovi Argomenti, Nazione Indiana and Sud.