New Edition - March 2021! And for the first time also available in Gold. 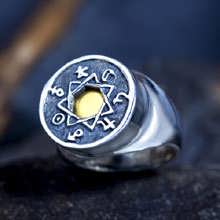 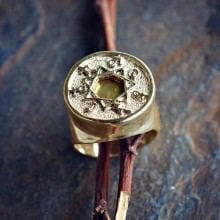 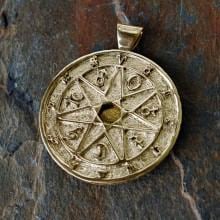 The Chaldean order Talismans contains the symbols of the 7 planets arranged in the Chaldean order in the inner circle and the signs of the wheel of the zodiac in the outer circle. The middle part contains seven metals, iron, electrum - an ancient alloy of gold, silver which replaces the lead, pure gold, silver, copper, brass (replaces the metal, mercury) and zinc. The power of the pendant is in the combination of the seven metals, in which each is connected and strengthen different qualities of the person in accordance with the planet to which that particular medal is connected.


The Chaldean order connects these qualities according to a flowchart, in such a way that each one will be its rightful place in relation to the other, and in this way, it will express its power to its maximum while maintaining harmony.

The Talismans are very strong protection talismans that designed to bring success and healing to its bearer, along with supporting his personal development. The beauty of the amulets is that it suits every person and situation because it contains all the latent qualities and each person uses exactly the ones he needs at a specific time.

The Chaldean order is a hierarchy of powers that are represented by heavenly bodies (the stars). The order of powers is expressed on the axis of time as orbits of the seven discovered planets - Saturn, Jupiter, Mars, The Sun, Venus, Mercury, and the Moon. Each of these controls a stage in the linear process of time. From the furthest and slowest- Saturn, till the nearest and fastest - the moon.

According to the tradition of alchemy, the seven planets are reflected purely in seven metals. These metals are raw material and stages in the creation of gold (the philosopher’s stone). The metals are actually material expressions that reflect essential principles of creation and of the spirit. The metals evolve alchemistically towards, gold - in the same way, the human being evolves towards spirit. According to the Chaldean order the planet relates to metals like this:
Saturn - Lead (replaced by Zinc)
Jupiter - Tin
Mars - Iron
The Sun - Gold
Venus - Copper
Mercury - Mercury (replaced by Electrum)
The moon - Silver

Based on an ancient kabbalistic formula for protection and success
The rings are based on an ancient kabbalistic formula found in the Sefer Refuah ve Hayim (The Health and Life Book). The ring is made only once a month on the first Saturday night of the Hebrew calendar month. The secret of the five metals ring's success is that at the specific time of the creation of the ring with these five metals, Jupiter's influence is summoned forth. Jupiter is the star of development and expansion, and success. 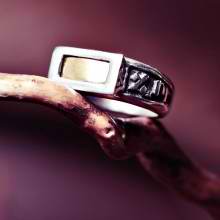 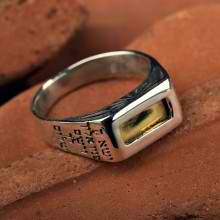 The Sun talisman brings the fire and light into your life.
It is a symbol of optimism, creativity, and success. The Sun talisman sharpens the mind and strengthens your life force. The Talisman is embedded with the glyph of the Sun in Gold (The Sun metal). In the center of the talisman there is the ancient magic seal of the sun and on the outer ring of the pendant engraved the magical 'alphabet'.