Solar Talismans Assembled on the 9th of August and Sirius on the 15th.

Last month the Sun has entered the sign Leo, which is its heavenly abode. This is the yearly visit of the royal Sun to its own castle, where it sits on its cosmic throne, and its essence most purely manifested. In this very auspicious election, the Sun is culminating on the Midheaven in its planetary hour while also in a harmonious aspect (Trine) to Jupiter in Sagittarius, doubly reinforced by the waxing Moon applying to a conjunction to Jupiter (and a Trine to the Sun). The Sun also has a natural affinity with the culminating angle (Mid-Heaven) where it is most strong and visible, as this is the highest point in the sky symbolizing rulership and authority, power, dignity and career achievements. Aspecting the Moon and Jupiter which are in the 2 house of possessions and gain, it is also a powerful symbol of success, abundant wealth and prosperity.

This Year, we are celebrating the heliacal rising of the brilliant star Sirius, the sky’s brightest star, with a couple of very powerful planetary alignments. These are the days that Sirius is making its first-morning appearance (depending on the latitude), rising before sunrise, after its long disappearance (around mid-may), he is now resurrected again from the solar light.


This year the at the chosen election time for the Sirius Talisman, it's rising is closely aligned with other reinforcing celestial events; most notably, perfect alignment with the rising of Mercury which also makes its first-morning appearance around these days. Both are rising on the horizon together at the same time! This is called Paran (short for Paranatellonta - “rising together”) and it is said to greatly enhance the mediation of a star, through that planet, to its earthly manifestation. In this instance, the enormous creative powers of Sirius can be channeled through the intellect, and all the verbal and mental skills of Mercury, which are very expressive in the Sign of Leo.

Furthermore, we have elected the time of the Full Moon of the month, which according to ancient sources, is the summit of the Sirius/Leo energy of this important month, which most of the festivals took place. This is the time when the atmosphere is the most saturated with this creative rebirth of vital energy.

Additionally, under this same election time, we are also having Venus in “Cazimi” (at the heart of the Sun) just about to have her own rebirth to her new cycle. Venus is emanating her universal powers through the solar rays, magnifying beauty, magnetism, and powerful charisma.

We also have Mars pretty close to the fixed star Regulus (2º orb), another bright and powerful star, activating some of its royal power into the mix. Lastly, we have Jupiter just stationing direct (considered very powerful) in Sagittarius, after his long retrograde.

All and all, we have a very powerful astrological energy for this year’s Sirius Talisman!

SIRIUS is a star of success and power, and it appears to heighten the beneficial qualities of that planet it is affiliated with, in this case brilliance and magnanimity.


The Making of the Solar Talismans - 9th of August 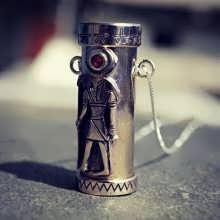