The Divine Reflection pendant is made as part of a fascinating journey into the depths of ancient philosophy, Renaissance art, The Kabbalah and the biblical mathematical and geometrical encrypted symbolism. At the base of this pendant lies a secret code hidden and encrypted throughout human history.

The Greek philosophers discovered the mathematical geometrical nature of creation. Patagonians researched those discoveries into great depth but hid them from those opposing them. The same knowledge appeared later in the Jewish Kabbalah and again at the times of the Renaissance. The secrets of the Golden Mean, the five platonic solids and the 13 Archimedean solids, these shapes and mathematical geometrical laws were encrypted in the works of leading artists such as Leonardo De Vinci and Albrecht Direr.

The more I focused in these shapes the clearer it became to me. The secret they were all trying to hide. Humans are created in the pattern of creation itself. Furthermore we humans have the ability to elevate to the level of creators.

For hundreds and thousands of years we observed those perfect art creations, from the Parthenon, The big Pyramids, Giza Pyramid and to the paintings of the great Renaissance artists. We observed and impressed by the harmony and perfect ness but most of us are not aware that those creations impress us so much because of the secrets of creation encrypted in them.

The Divine proportion refers to the Golden mean, that same mysterious proportion that exists all around us in many places in nature.

In a famous Portrait of Luca Pacioli from 1495, he appears pointing towards a board with a sketch of one of Euclid's geometrical proofs. In the picture Luca is observing a glass made Rhombicuboctahedron half filled with water. On the table next to it appears a dodecahedron. When I observed the picture deeply I understood that I found the symbol I was looking for. 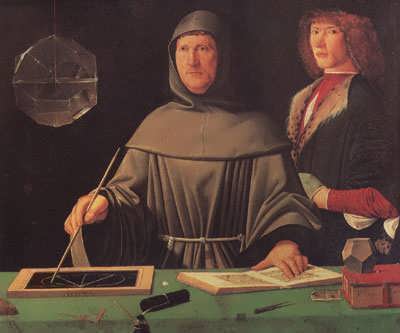 When looking closely at the picture I noticed that the Rhombicuboctahedron reflects the view of the windows from all around. The cause for that is that it is a shape that has the ability to reflect a panoramic spherical view of 360 degrees on to 180 degrees.


In the Divine Reflection pendant encrypted few keys to the universal truth:
The structure is built from 26 faces. 26 is the Gimatrian calculation of Hebrew G-D name. 26 is also the key to 72 used with the Pythagorean Tetractis.

The Divine reflection pendant symbolizes the way the universe and the Creator experience reality through us. It is also a key for us to connect to our own divinity through the insight of creation.