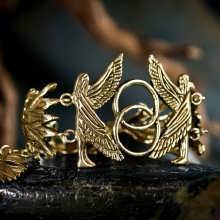 The Vesica Pisces is used in a wide range of symbolism:

Composed of two well-known symbols - the Vesica Pisces and the Tetractys. An ancient symbol of knowledge, harmony, wisdom, and love.
Share the symbol around and remember that one small light can illuminate great darkness…

The Light Pendant Silver and Gold

The Making of The Light Pendant


The first day of creation Bracelet

The two winged images are called the Cherubim (Cherubs) and represent the feminine and masculine forces of creation, and the perfect balance between the two forces composing reality. The Cherubim were found upon sacred artifacts in ancient Egypt and of course the Ark of Covenant. Diagrams of the Vesica Pisces and the Seed of Life and the Flower of Life were found in ancient Egypt alongside ancient Greek writings which indicate that it was probably made by disciples of Pythagoras.

On both sides of the bracelet, I have placed the Lotus Flower. The Flower was used in ancient Egypt in many religious rituals probably of the mild psychoactive properties of this plant. The Egyptian Lotus symbol was used as a symbol of the Sun and the afterlife since it's flower buds rise to the surface of the water over a period of 2-3 days and when ready open in the morning and then close in the afternoon. 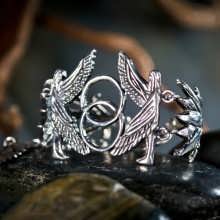 With the Vesica Pisces symbol and the Cherubim. 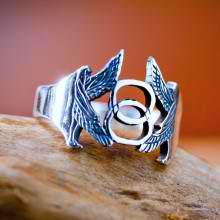 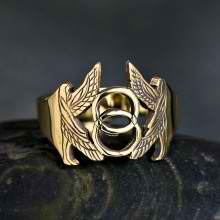 "Hello David, My wife was born with a rare disease called scleroderma. The disease damaged her kidneys and five years ago, she had a kidney transplant. Four years ago, the planted kidney stopped functioning and she became dependant on an oxygen machine.

Before she died she wore one pendant on her neck. She told me a few details about the person who made it and requested to continue wearing it even when she was with a dialysis machine. She told me that when she will feel better we would go and get one for me. A little while before she died she requested to put the pendant on her again (it was taken off because of all the machines). After she died, her mother asked for the pendant and I gave it to her.

I searched for a similar pendant night and day without success. I thought it was named something with Cherubim (because there are two holding the Vesica Pisces symbol on each side). It was very important for me to reach the 30th memorial with the pendant. On Friday, four days before the memorial, I searched again using Google images. I reached pages 8-9 and 10 and nothing. I stopped and asked for help from my wife. The next click, I suddenly saw the pendant. I clicked on it and it lead me to Your website. The artist was found and the pendant that symbolized our life more then anything was found… tears went down and the heart was broken, even while writing these words.

On Tuesday, when I will visit her grave, I will whisper to her that I found the pendant and will carry it with me forever…