Courage for the Heart and Strength for the Mind

The main feature of Odin's knot comes in the form of three interlocked triangles, showing a total of nine points. Flanking each side of these triangles are the two ravens associated with Odin: Huginn or "thought" and Muninn or "memory."


The Story of Odin's Knot

Odin is the king of gods in Norse mythology. In the Nordic pantheon, Odin holds dominion over the war and death, but he is also associated with magic, wisdom, prophecies and poetic works.  He is always depicted grasping his spear and in the company of his two ravens.

One of the stories associated with Odin's knot has something to do with the giant Hrungnir. In this story, Odin made a wager that his steed Sleipnir would be faster than Gullfaxi, the horse of Hrungnir. Sleipnir raced against Gullfaxi and won. 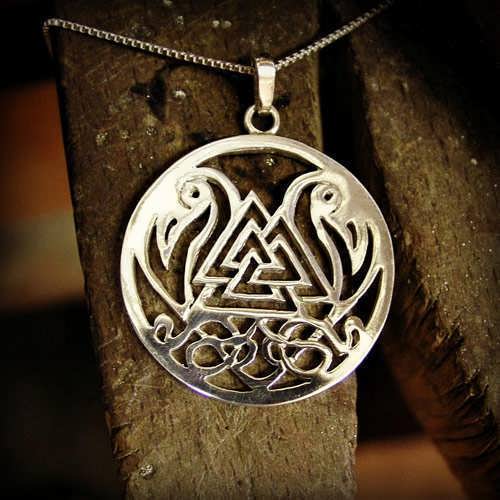 Hrungnir went to Valhalla after the race, and there he became known as a giant who could not hold his drink. Not only that, but Hrungnir was also abusive when he was drunk. The gods tolerated his behavior as best as they can. When they reached their limit, the gods in Valhalla asked Thor the god of thunder to do something about Hrungnir. Thor challenged and then defeated Hrungnir in battle. It was noted in the story that Hrungnir's heart had a strange shape, like three triangles locked together.


The Significance of Odin's Knot

Odin's knot represents many formulas interesting to mathematicians. It is the geometric equivalent of the Borromean rings, which are three interlocked circles wherein the removal of one circle causes the two others to unlink.

It is believed that the nine points created by the three triangles in Odin's knot represent the nine worlds and the nine fates in Norse mythology. These nine worlds are divided among three realms, namely:


Odin's knot is also tied closely to beliefs surrounding the concept of creation. The three triangles are also thought to represent the unending cycle of rebirth, pregnancy, and reincarnation.


The Odin's knot motif often comes in pendants, to be worn hanging from a chain around the neck. It is meant to imbue its wearer with self-confidence and courage, as well as inspire him or her to do great works. The god Odin is said to have the power over the minds of humans  He can leash or unleash the human mind according to his will. By wearing Odin's knot, one can release the mind from fear and stress, making him or her brave of heart and strong of mind.