Sacred Geometry pattern of the Universe


Flower of life - symbol of all major religions

After the creation of the Seed of Life (See the article about the seed of life) the same vortex's motion was continued, creating the next structure known as the Egg of Life (diagram 8). In three dimensional forms, it looks like diagram 4. This structure forms the basis for music, as the distances between the spheres are identical to the distances between the tones and the half tones in music.

It is also identical to the cellular structure of the third embryonic division (The first cell divides into two cells, then to four cells, then to eight). Thus this same structure as it is further developed creates the human body and all of the energy systems including the ones used to create the Merkaba. If we continue creating more and more spheres we will end up with the structure shown in diagram 8a. This structure is called the Flower of Life.


Fruit of life inside the Flower of life

The flower of life holds a secret symbol created by drawing 13 circles out of the Flower of Life as shown in diagram 8b. By doing this, one can discover the most important and sacred pattern in the universe. This is the source of all that exists; it's called the Fruit of Life. It contains 13 informational systems. Each one explains another aspect of reality. Thus these systems are able to give us access to everything ranging from the human body to the galaxies. In the first system, for example, it's possible to create any molecular structure and any living cellular structure that exists in the universe. In short every living creature.

By connecting all the middle points of the 13 circles to each other, one gets the pattern shown in diagram 8c. This pattern is known as the Metatron's Cube. Inside it are five three- dimensional shapes known as the Platonic Solids. These five shapes and all their combinations create all the possible structures in the universe, such as the embryonic cell division existing in every living creature.

The five "Platonic Solids" are - the Dodecahedron, the Octahedron, the Icosahedron, the Tetrahedron, and the Cube. These structures with their different combinations are the basis of every molecular structure and every known structure in the universe.


Pythagoras considered the dodecahedron to be the structure of the universe itself since the proportions of its facets held the key to Phi - the golden mean measure which can be found everywhere in nature. 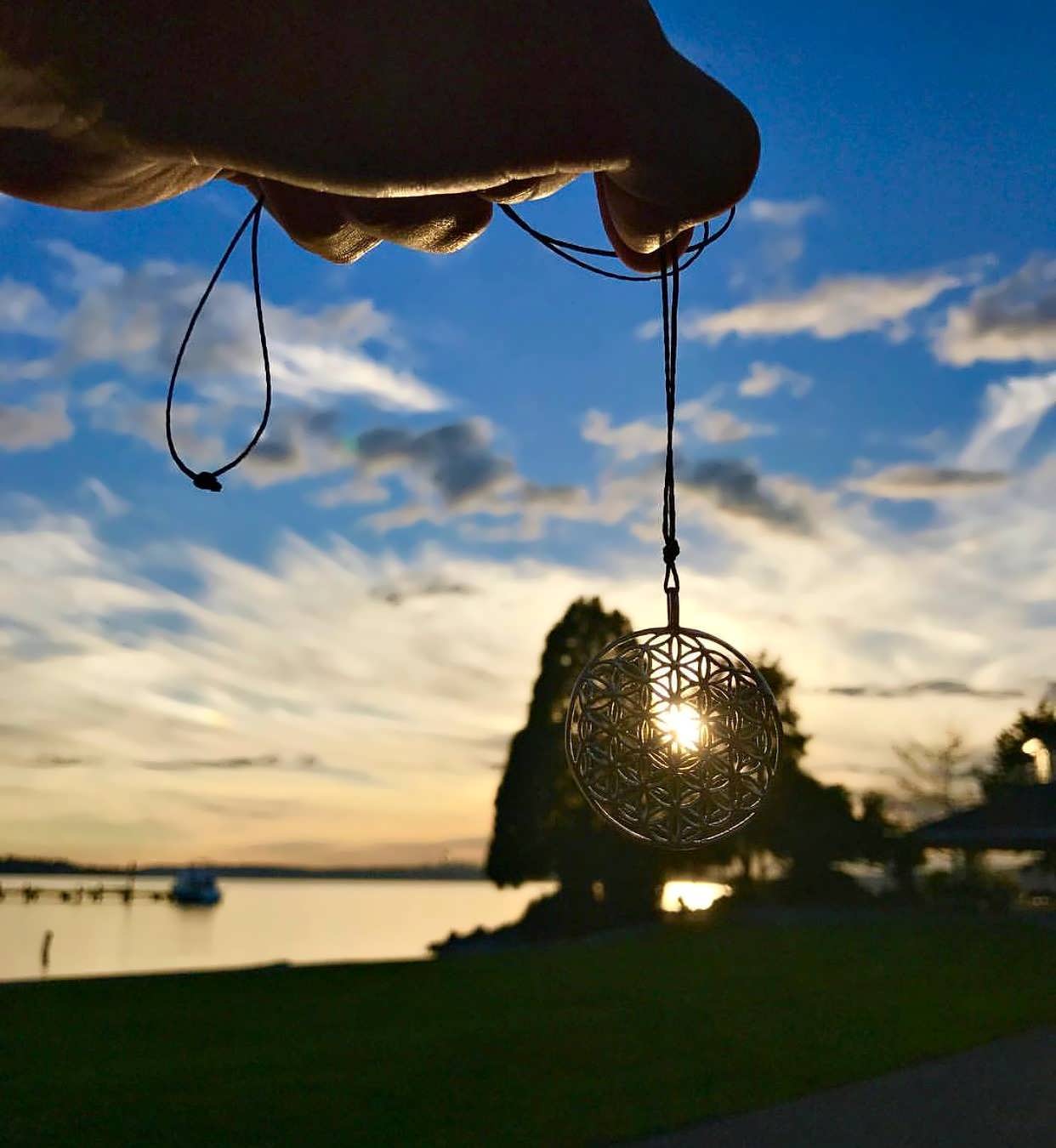 The unique qualities within the Flower of Life were taught in Egypt in the 18th Dynasty, during the reign of King Akhenaton. He established three schools of mysticism:

The Right Eye of Horus
Dedicated to the left (masculine) side of the brain. This side controls logic, calculations as well as the ability to understand geometry and spatial relations. Its aim was to prove the existence of one spirit that exists everywhere and in everything.

he Left Eye of Horus
Dedicated to the right (feminine) side of the brain (emotion and sensitivity side).

The Middle Eye of Horus
Dedicated to life itself.


The Egyptians were aware of dimensions and referred to a higher level of existence called "The Fourth Dimension," known as the "afterlife". The aim of the schools was to reinstate the knowledge of the "One true force - the almighty" that exists everywhere and in everything. This knowledge which came from the advanced Atlantean race was lost 13,000 years ago with the destruction of Atlantis. This loss resulted in "good and evil", duality consciousness.

King Akhenaton, as a messenger of the ascended masters, reintroduced monotheism to his subjects whom, due to the long passage of time had forgotten this Atlantean knowledge. The Egyptian idols were only symbols of the one true God, the "Neter Neteru," that which is beyond definition. Egyptian mythology was transformed into a form of symbolic calculus, by which the sages interpreted the evolution of spiritual states and psychic landscapes. Her religious teachings promoted unity and monotheism but it was never defined beyond the simplistic "Neter Neteru". This Pharaoh's death left behind a legacy that was the source of all the modern monotheistic religions.

Another Theory about the source of Flower of Life symbol

One of the ancient monuments where you can find the Flower of Life structure is the Ancient Egyptian Temple in Abydos. Some people believe that this structure has an extraterrestrial origin and that the structure was etched into the pillars of the temple with alien technology. However, the structure itself was painted with red ochre which as a result of the oxidation process that took place over centuries became part of the stone itself.

Near these ancient drawings of the Flower of Life and the Seed of Life, there are old Greek Letters. As we mentioned above the Flower of Life contains a fundamental structure known as the Fruit of Life from which one can derive all the Platonic Solids. These five structures were studied by the ancient Greek philosophers, especially Pythagoras and his followers the secret society of the Pythagoreans who considered these structure to be sacred and secretive.

So another theory is that none other than the Pythagoreans made the Flower of Life in the Abydos temple. This is an ode to the human ability and spirit which was able to grasp the secrets of the universe and sensed the realms of the unseen reality in without using a photoelectric microscope.

The Connection Between Flower of Life and The Kabbalah

These same principles and teachings can be found in the land of Israel in the early teachings of the Kabbalah who delved into the studies of another sacred pattern, hidden in the Flower of Life - The tree of Life. The Kabbalists called the ten connected circles or spheres of the structure sephirot (Countings) and used this structure as a key that shows the flow of light and consciousness from the endless divine source. The Tree of Life is also referred to as the structure of the different realms of reality.