Symbol of Harmony and Beauty

The Golden Spiral structure represents two well known sacred geometry shapes: the golden mean (phi) spiral and the Fibonacci spiral. It is a based on a crop circle shape known as the "Hackpen Hill Formation" and it appeared in an English wheat field in 1999.

Phi is a constant value which is even more mysterious and profound in its implications than pi. Like pi, phi is a number with no arithmetical solution. The decimals just keep on going into infinity without ever repeating themselves. The unique thing about this number is that it can be found incorporated in all known organic structures. From the bone structure of human beings to the seed pattern of a sunflower to the spiral of a sea shell, the phi proportion is there, underlying all biological structures, seeming to be a geometrical blueprint for life itself.

Plato went so far as to call the phi ratio the "key to the physics of the cosmos". Phi is calculated at 1.6180339+..., and while it cannot be worked out arithmetically, it can be easily obtained with a compass and straightedge.

Two simple ways of finding the Golden Section geometrically are as follows:
Method one
If you take two equal squares, side by side, (a 1x2 rectangle), divide one of the squares in half, and with a compass, swing the diagonal down to the base of the other square, the point where the diagonal touches the base will be phi, or 1.6180339+, in relation to the side of the square, which is 1 (This formula also describes exactly the rectangular floor of the King's Chamber).
Method two
The other method of determining the Golden Section is by dividing a line segment, AB, at a point C, in such a way that the whole line is longer than the first part in the same proportion as the first part being longer than the remainder. AB/AC = AC/CB = 1.6180339 (notice the fractal and holographic nature of this ratio...). 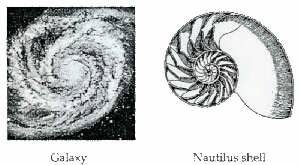 Whoever cultivates the golden mean,
avoids both the poverty of a hovel and the envy of a palace.
(Ancient Roman poet)

The phi ratio is found in the architecture of the Great Pyramid in the triangle formed by the height, half-base, and the apothem, or diagonal. In other words, the basic cross - section of the structure demonstrates the Golden Section. If the half - base is given a value of 1, this gives the value of phi for the apothem, and the square root of phi for the height. The Golden Section shows up again and again in Giza and in much more baffling and tedious ways (Entire volumes have been written on the geometries involved in the pyramids construction).

Fibonacci sequence and the golden spiral

Fibonacci spiral and the pyramids of Giza

Aerial photographs show that the pyramids at Giza are positioned in such a way that they fall on a line which accurately defines a Fibonacci spiral. The spiral passes exactly through the centers of each pyramid.