The concept of the planetary grid is not new. Plato spoke about this in his work Timaeus as "The ideal body of cosmos" and explains the grid as the synthesis of the platonic solids. The grid that covered the earth was formed of the five platonic solids, as an emanation of creation. Plato believed that the basic structure of the earth was in a process of evolution from simple geometric forms to other more complex forms.  In the order of complexity, the five patterns that formed the blocks of the crystalline matrix are: The Tetrahedron, the Hexahedron or cube, the Octahedron, the Dodecahedron and the Icosahedrons.

The Jerusalem 2001 bombing and the Christ consciousness experiment

In 2001, there were many bombings in a specific area of Jerusalem. One day someone arrived at David's workshop to view his work. When he saw the Christ consciousness pendant, he was very much attached. He felt it had great harmonious powers. He suggested to David to experiment and spread 30 of these pendants all over Jerusalem. The bombing stopped the same day!

The idea of collective human consciousness is widespread these days and is underlying principles related to chromosomes and Jungian theory. Some of the ideas behind this are based on the teachings of Drunvalo Melchizadek.

Here's a snip of an interview with him (Leading Edge, 12/95):
"There are three totally different kinds of humans on the Earth, meaning that they perceive the one reality in three different ways, interpreted differently.  The first kind of human has a chromosome composition of 42+2. They comprise a unity consciousness that does not see anything outside them as being separate from them.  To them, there is only one energy - one life, one being ness that moves everywhere. Anything happening anywhere is within them, as well. They are like cells in the body. They are all connected to a single consciousness that moves through all of them. These are the aboriginals in Australia. There might be a few African tribes left like this. Then, there is our level, comprising 44+2 chromosomes. We are at a disharmonic level of consciousness that is used as a stepping stone from the 42+2 level to the next level, 46+2... These two additional chromosomes change everything." 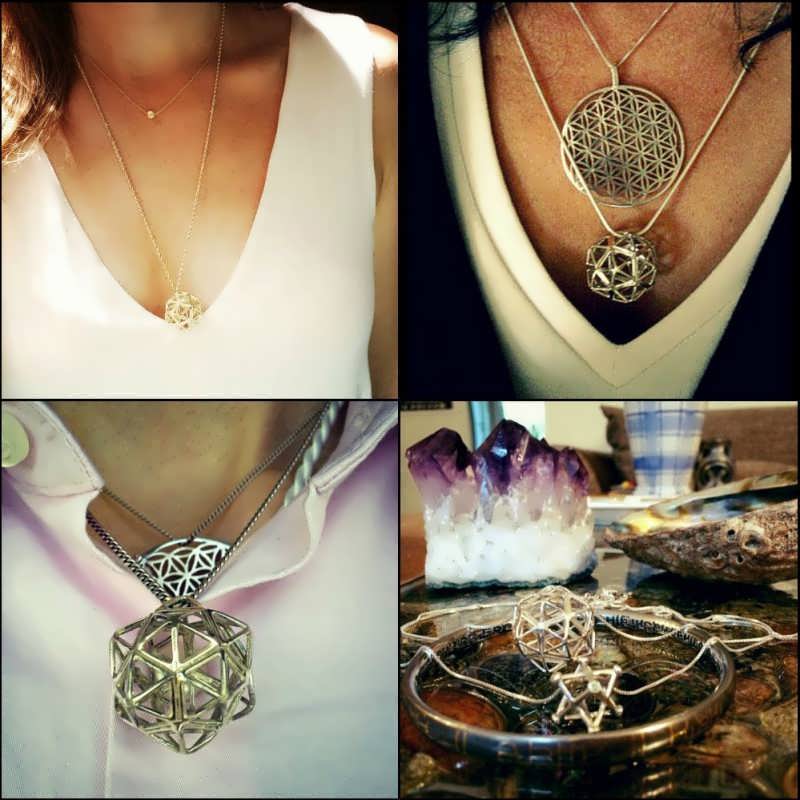 According to Drunvalo, the grid of the third level was destroyed 13,000 years ago.
The Grid was reconstructed by the hidden sects of the ascended Atlantean masters, a process that came to its end in 1989. In the Olympic Games that took place in Sidney, Australia, during the closing ceremony the whole stage came out of the ground and took the shape of a huge dodecahedron, with all the different competitors from the different nations standing around it with the aboriginals as well!

The Grid is the Akashic library of this planet. It also allows us to know future events. And that is the reason so many Channelers have appeared since 1989.

72 names for god - 72 facets for the Christ Consciousness pendant

In the Jewish tradition, there are the 72 sacred names of God. By taking the middle sentence of the holy Torah and dividing it to thirds you'll end up with 72 names which are constructed of three letters. Some of these names are similar to the definitions or names of the One God throughout the different cultures (such as Aum in Buddhism). Since God has no name or definition there has to be another explanation for this phenomenon. If you take a look at the shape of this pendant which represents the united consciousness of humanity, the Christ Consciousness Grid, you'll discover that it is made out of 72 facets...

The Christ Consciousness pendant radiates a very high and subtle vibration and has excellent healing characteristics.