The Seed of Life

Symbol of Creation and Fertility


Seed of Life - A Universal Symbol

The Seed of Life is a symbol for the seven days of creation. It is found in all major religions and can be seen in many sites e.g. Synagogues, churches, Kabbalah prayer books, and of course, the ancient Osirian temple in Abydos Egypt, the source of all the major religions and mystical studies.

The Seed of Life is part of a group of shapes categorized as part of Sacred Geometry. Those shapes are - the circle, Vesica Pisces, Flower of Life, Fruit of Life and Metatron's Cube. Through its connection to these symbols, the seed of life is also related to the Platonic solids.

The Seed of Life is a symbol of blessing and protection passed through generations; it contains the secret of the seven days of the creation. It is a common ornament for fertility for women during pregnancy or trying to Conceive.


Creating the Seed of Life

In the beginning, the first step was the creation of the Octahedron. The next step was to spin the shape on its axes. In this way, a sphere is formed (see diagram 7). Bear in mind that the creator's consciousness exists within the Sphere, and the only thing that really exists is the membrane of the sphere itself.

The next thing the creator's consciousness did was to go to the outside surface of the sphere, (the old testament refers to "the spirit of the Creator floating upon the face of the waters") and creating another using the same process of creating an octahedron and turning it into a sphere. By creating the second sphere the Almighty actually created light. In projecting another converted octahedron into a sphere on the surface of the first sphere, you will get the image of two circles crossing each other in their centers, a shape known as Vesica Pisces (diagram 7a). This pattern is a geometrical formula which represents the electromagnetic spectrum of light (for further information how this can be done, check out Drunvalo Melchizedek's book "The Ancient Secret of The Flower of Life Vol.2") and the first thing that God created was light - "Let there be light".

Note that here the seven day creation process ends. The Seed of Life is fully formed on the "SHABBAT", the day of rest. The first vortex is completed and the seed which contains the blue print of the universe is fully formed.


Seed of life - The Origin of all

The Seed of Life is a stage before the shape known as the Flower of Life which produces the "Fruit of Life". The Fruit of life is the base for the Metatron's Cube which holds the Platonic Solids in it. The platonic solids are said to be the building blocks of the universe thus bringing us back to the seed of life as the source. 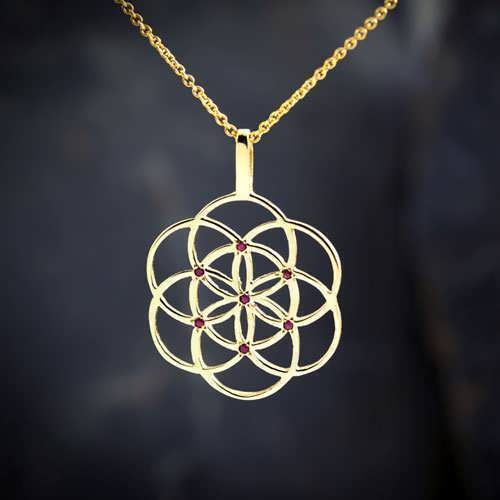 Seed of Life and Hebrew Alphabet

In the 13th Century, a Cabalist's group from France succeeded, through geometric interpretation, to divide the entire Hebrew alphabet in its correct order using the Seed of Life. The resulting alphabet was in fact remarkably similar to that of the Religious sage Rashi who wrote his commentaries on the Old Testament at that time in France.