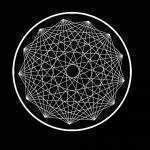 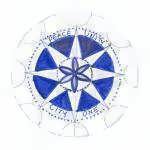 Hill crop circle
This fascinating and beautiful shape is simplified reconstruction of Milk Hill crop circle formation found on 21 August 2001. The crop circle formation contains 409 circles - image without small circles. The above pattern is characteristic of fractal geometry in nature . One of the best examples can be found in single-celled marine organisms that construct shells, such as Foraminifera. According to language of numbers 409 in Hebrew translates to Sign of the Crescent. 409 is sum of color spectrum from red to violet.

kajha-sintha
kajha-sintha is a mandala composed of a hexagram representing divine union, three eyes representing awareness of the inner self, the physical self and the transcendant self, and three stars representing the stages of universal evolution that have preceeded human sentience. all of these elements come together in a fully integrated central flower that is the living culmination of the cosmic flow of energy that pervades and defines us. kajha-sintha, like all mandalas, provides us with a visual representation of our integral connection to the rest of the universe, which we mistakenly view as being separate from us.

Symbiosis
This model reflects the power of creation: It seems aggressive and chaotic and reminds us of the \\\"Chaos\\\"-Symbol. But inside there is the ultimate unity, the gentle togetherness of Yin and Yang, symbolising the polarity of existence. Yin and Yang, the ancient symbol of Tai Chi, surrounded by the I-Ging-signs that also represents an ultimate code for well-being and a successful and healthy life. This symbol is able to tranfer this inner silence and peace by using the powerful chaos which builds the basis for all existing paths and goals in life. It creates a good health, a ballance between the polar elements inside of us and it gives us strength and power to overcome the illusion of polarity. And thus, in the name of the love of god, we will hopefully see that all is one. 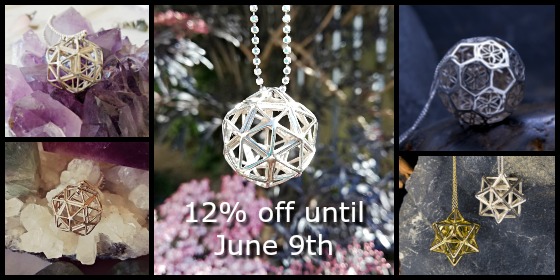