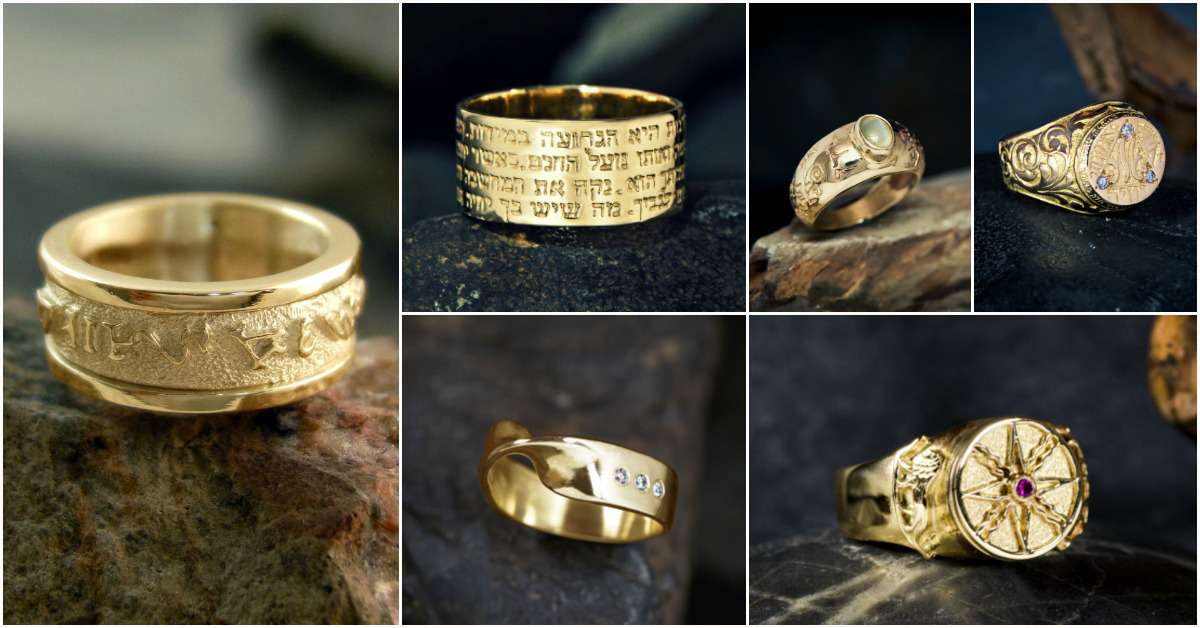 Created by the Artist David Weitzman

Below you can find a collection of gold rings that men can wear. Available in 14K and some are also available in 18K and 22K. What makes the gold rings in the collection fit men is that they are not specifically feminine in design and that they hold meaning that is universal and speaks to all genders.

This Talisman gives one a strong positive and inspired attitude. Helping one to get in touch and exercise personal power and expression, and gravitate to places of honor and recognition.

The symbol on the top is the ancient Mesopotamian symbol of the Sun or the Sun god Shamash and on both sides of the ring, there is the ancient Egyptian Zodiac symbol for Leo. The Ruby is considered in ancient traditions as the stone that symbolizes the Sun, life, and strength.

The ring of courage is intended to give the wearer the understanding that fear is one of the greatest causes of one’s suffering and that if you cleanse your thoughts, they will vanish. A wonderful Gold ring for men to find their inner courage.

It represents a key to the endless cosmic process of cause and effect and Karma. A symbol of unity and a constant reminder to look at everything outside the delusional dualistic concept of good and bad, us and them, and the “I” “ME” “MINE”.

Based on one of the greatest novels ever, the Master and Margarita, by the Russian novelist Mikhail Bulgakov. The ring is engraved with the Hebrew quote: “Each will live according to his own belief”. Encircling the ring is a Hebrew engraving of a citation from the book by Faust: “Who are you, then?… I am part of that power which eternally wills evil and eternally performs good”.

Created especially for truth seekers and travelers. The Hebrew engraving around the stone means – “Father of the four winds fill my sails across the sea of years”, a sentence taken from the Led Zeppelin song – Kashmir. On one side of the ring appears the phrase “The farther one travels the less one knows” (written in Hebrew). Great for men who travel and are on a journey (internally or externally).

The inscription on the ring is taken from a Jewish prayer and it says: “Opens thy hand and satisfies all that is alive” (POTE’ACH ET YADCHA U-MASBI’A LEKOL CHAI RATZON). The ring helps adjust his/her state of mind and empowers him/her to open up to and accept the all-pervading abundance that surrounds us. This gold ring is great for men looking to find abundance in their life.

Gold I Love Therefore I Am Ring

The phrase was modified from a mere logical claim to a statement that sums up the essence of the entire creation – “I love therefore I am” or in Latin – “Diligo ergo sum”. A powerful reminder of what life is all about…

The Dune ring is inspired by the book Dune, authored by Frank Herbert.
The translation of the Hebrew phrase engraved on the ring is: “That which submits rules” – A line taken from the book. These words hold the secret to true human enlightenment. The green emerald stones represent the black and green flag of the house of Atreides and symbolize the center and compassion of the heart.

At the center of the ring appears the symbol of Victoria – the goddess of victory. On the back of the ring is the engraved sentence – “Dare to be Great”. Inspire you on the path to victory and success. Most suitable for men who seek greatness and compete for victory.

The coin that appears on the front of the ring is an exact rendition of the original coin from the Jewish revolt against the Roman Empire. In the center, there is the jar of manna and around it is the writing, Year Two. On the sides of the ring is the date tree which is the ancient symbol of the kingdom of Judah. Around which I have added in ancient Hebrew the writing “Ben-Hurin”- which means “a free man”.

The ring is inscribed in English – This shall also pass. Remind the wearer that change is the nature of all things.

This is a very unique, one of a kind individualized Talisman that can’t be found anywhere else… Made according to your birth chart and personalized to the wearer’s needs. A personalized ring (in gold or silver) that is most suitable for men who are attracted to astrological knowledge.

Enjoy the powers of the ”Great Benefactor“ – Jupiter giving us abundance, success, guidance, and support in every action. The central image on top of the ring is the astrological symbol of Jupiter surrounded by yellow sapphires – the “traditional stone” of Jupiter. On both sides of the ring appears symbols of the sun and the moon.

A modern take on the 17th-century philosopher Baruch Spinoza’s own signet ring. A powerful symbol of courage and self-truth. The ring is a symbol of courage, bravery, and self-belief. It is meant to inspire the wearer to be confident and to hold on to his own beliefs (just like Spinoza did in a hostile environment). For men who are looking for inspiration to stand with courage in their beliefs.

Engraved with a sentence from the Emerald Tablet and set with 4 emerald stones. Truly a powerful Talisman for writing, speaking, learning, memory, business dealings, fast-thinking, and acting on one’s thoughts. Mercury also has higher expressions and is also considered the ‘revealer of mysteries’, and helps in gaining a higher understanding and articulation of occult and abstract truths.

When Jupiter is working well, he is a powerful life-affirming and prolific, and radiates a balancing and healing energy. He denotes the feeling and circumstances of support, integration, and expansion at all levels. This gold ring connects men to the power of the great benefactor (Jupiter).