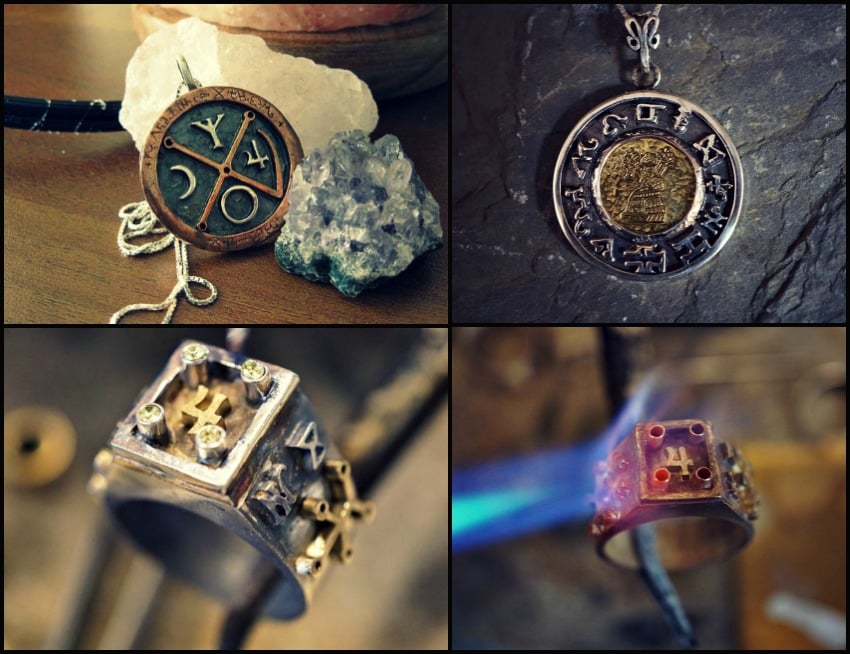 The book of Alexander refers to “The Seal of Jupiter” and says:
“How to make the Seal of Jupiter which diminishes weakness and ends physical discomfort“
The text continues:
“He who uses it will be loved by all people, who will praise and compliment him. If you have a dispute with an adversary you will be able to dominate him and yet also be on good terms with him. It is powerful in controlling judges and religious men. Whoever uses it will conquer anything he is confronted with, be saved from any danger and even in transactions of great risk he will gain.” (Translation – Nicholaj de Mattos Frisvold )

Jupiter amulet is great for success and prosperity, guidance, healing, and spiritual truth. Jupiter is considered to be the ‘great benefactor’. It is the largest planet in our solar system and presides over the principles of expansion growth and synthesis.

Jupiter is considered the planet that influences the higher faculties of the mind, our ability to synthesize and to have a deep understanding of concepts and experiences. Because of this, Jupiter rules philosophy, religion (in the open and liberal sense) and spiritual insight. Jupiter also controls moral ethics and justice and our inherent capability to discern between good and evil.

Jupiter with Venus and Moon amulet

This Talisman mixes the beneficial powers of the three with a marked emphasis on Jupiter. Together the three generate a pronounced good fortune. It is an energy of celebration, of optimism, expansion of the heart, joy, adventures, stimulating and exhilarating experiences, self-expression, creativity, and excellence in actions. Ruling the rising sign and on the Midheaven, It signifies rising to success, fame, general good luck and support in career actions and achievement in the world.

This is a powerful alignment between two of the most fortunate celestial bodies; The planet Jupiter is considered astrology’s “greatest benefic” and the fixed star Spica (of the Virgo constellation) which is considered one of the luckiest, good giving, glorifying, healing and protective stars (situated in the tropical sign of Libra).

Jupiter cycle is about 12 years, roughly 1 year per sign, which means that it took Jupiter 12 years to reach the entry of its own sign (Sagittarius ) again and that he will stay in it for a whole year.

The virtues of Jupiter are praised throughout the history of astrology – He is considered to be a very potent positive (some say the most positive) life generating energy, more temperate than the solar and lunar energy, and in many ways sharing in both as he is considered to be the only planet that mixes heat (solar) and moist (lunar); both qualities necessary for life.

In this Amulet, Mars has entered his heavenly domicile of Scorpio is joining Jupiter who has been there since October. In Scorpio Mars can claim back his natural strength and act independently empowered by his unique passionate power. The conjunction of Mars and Jupiter in Scorpio augurs the ‘Heroic’ archetype, giving tremendous energy and power to conquer anything one aspires too. It gives courage and steadfast intense energy which also helps conquer one’s deepest fears and transform them into raw power.

This conjunction can act exoterically and esoterically, it can give an intense charge of intentional energy and focus on helping one achieve his goals, success, and fame in the world. It also acts esoterically In giving one a penetrative power into mystical and magical realms. The power to Journey within and bring light into a deep and hidden part of the soul.