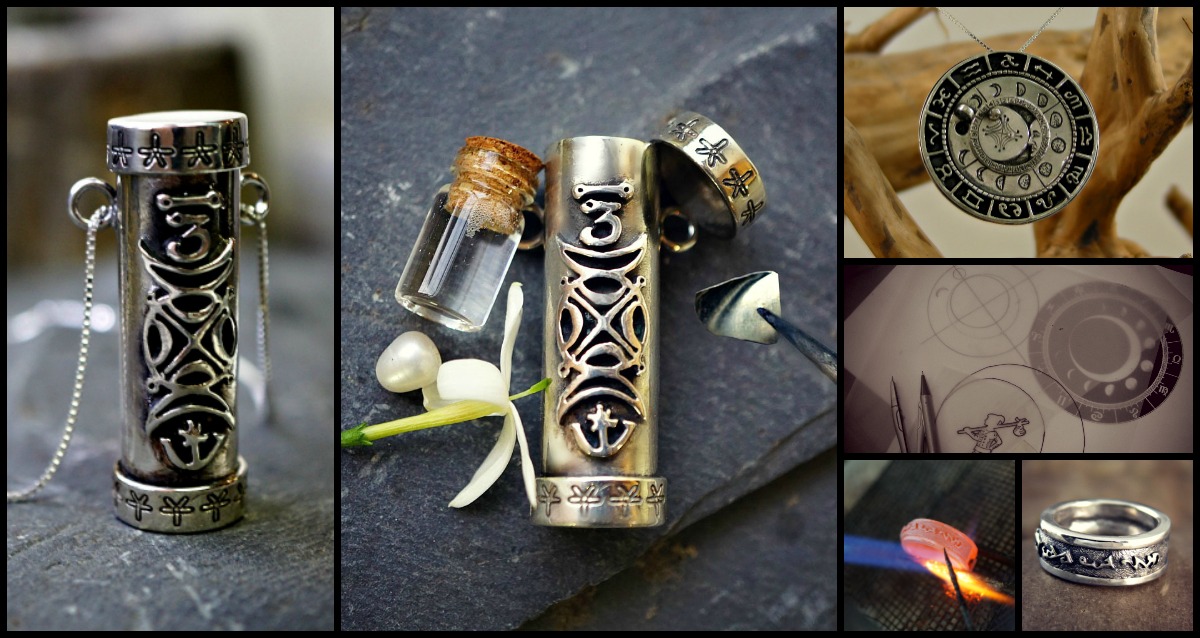 In this post, we like to share with you several Lunar (moon) Talismans and Amulets crafted by the artist David Weitzman in collaboration with the Astrologer Michael Ofek.

Lunar/Moon talismans are considered to have a very general range of helpful, protective and supportive influences. The moon is mostly known to represent emotional tides and biological rhythms.

When crafting a Talisman/Amulet and making a choice for the Election time (time of assembly where the Talisman/Amulet is consecrated), the placement of the Moon is extremely important. The Moon must be well placed, as it is responsible for the general flow of energy and events, and acts as a mediator between the planets, and the sublunar sphere of the Earth.

A Talisman of the Moon is considered to be helpful as general protection. Moon/Lunar talismans and Amulets are also made for increasing wealth and beneficial gain, in work, career and family life. It is also known to induce empathic communication and perception.

Our most recent assembly time for Lunar Talismans and Amulets was September 19th, 2019 between 03:21-04:18 GMT+3. You can learn more about this event in the post – “Moon exaltation in Taurus”.

A very unique piece of jewelry, a talisman that is also a Lunar calendar!! This talisman helps you track the movements of the Moon in the signs of the zodiac and its respective phases. It is made of three parts: the outer zodiac circle, a middle circle with the lunar phases, and an inner wheel of the average month (30 days). Combining the three wheels to the placement of the new Moon (by zodiac sign, and day number) you have a pretty accurate estimate of where the Moon will be all month long, by sign and by phase.

Using the Talisman to follow the phases of the moon and its movement through the zodiac signs is really simple. First, check online for Moon Phase Calendar for the closest new moon for the current date and click on it for more details. Then Look at which zodiac sign it occurs and the degree of the sign, between 0-30. Then all you need to do is move the dial of the moon phases wheel to the zodiac sign of the new moon and to the approximate degree of that sign. Then move the inner dial of the day wheel, which represents the average number of days of the month, placing the date number of the day of the new moon on that same approximate degree.

Each canister contains a small glass bottle containing water that was consecrated during that exact time frame under the Lunar influence, and Jasmin flower which is one of the plants ruled by the Moon. The canister also contains a pearl, and piece of silver which are also ruled by the Moon according to the ancient writings. The Talisman is considered to be helpful as general protection for the body and the psyche. Moon Taurus Talismans are also made for increasing wealth, general wellbeing, and beneficial gain and support, in work, career and family life.

The Lunar ring is embedded with the magical ‘alphabet’ of the Moon. The alphabet or planetary characters are taken from the “Picatrix” (a very important magical text that compiles to many ancient magical texts) and from “Three books of occult philosophy” by the Renaissance mage Heinrich Cornelius Agrippa. Like other magical planetary symbols, the alphabet’s intention is to communicate with the planetary spirit and drew its energy.