One of the last 4 remaining rare (once in 12 years!!) gold Jupiter Spica talismans– left the workshop.
The long-awaited Jupiter-Spica Talismans were assembled
Limited Edition was assembled on the 13th and 15th of September 2017 (See exact times below).

This was a powerful alignment between two of the most fortunate celestial bodies;
The planet Jupiter which is considered astrology’s “greatest benefic”, signifying growth, abundance, success, luck, and protection. The fixed star Spica (of the Virgo constellation) which is considered one of the most luckiest, good giving, glorifying, healing and protective stars (situated in the tropical sign of Libra).

Not only this was a very powerful Talisman for all the good things mentioned (and much more) – at the time of the conjunction, The beneficent planet Venus (which is also the ruler of Libra, where Jupiter and Spica have their conjunction) is joining Jupiter with a sextile aspect. This even furthers the connection and beneficial powers of this Talisman. Adding the Venusian flare of beauty, love, pleasure, success in and through partnership and romantic relationships.

We made the Talisman in two dates, both in the rising and culmination of the Jupiter Spica conjunction. In the first date, the 13th of September 2017 between 8:50-9:15 and 14:25-15:00 GMT+3 the – The Moon was in Gemini aspecting Jupiter by a trine and Venus in sextile (together forming a b-sextile figure). The Gemini Moon amplifies and reflects the Jupiter spica energies in social connections, communication, success in business, writing speaking, media and alike. 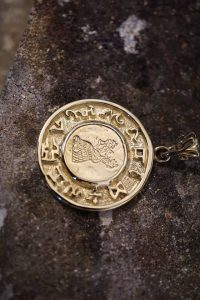