The Mystery of Metatron’s Cube

This complex Sacred Geometry structure – ”Metatron’s Cube”, is derived from the ancient structure of the Flower of Life. It is named after the Archangel Metatron. Metatron appears in Jewish tradition, Christian tradition, and in some aspects of Islam. Metatron is in charge of all of creation and is considered an Archangel as well as a judge.

It’s origin as well as the origin of the Flower of Life shrouds in mystery that can be traced back in time thousands of years ago. The importance of the Flower of Life lies in the hidden structure within it – The Fruit of life which is the “Holy of holies” of Sacred Geometry. It can be derived out of the Flower of life structure when we create a thirteen circles pattern out of the Flower pattern. Why was this structure so important and secretive? The reason is in its potential. If we connect all the possible centers of the circles we will receive 78 lines, creating a structure known as the Metatron’s cube. This structure contains bi-dimensional drawings of all 5 Platonic Solids: the cube, the tetrahedron, the octahedron, the dodecahedron and the Icosahedrons. These figures are unique in having all their vertexes tangent with the surface of a ball. These figures, and their different combinations, give every possible molecular structure and every possible geometrical law, the reality we live in.

These structures are named after (again) the ancient Greek philosopher Plato who was influenced by none other than Pythagoras and it’s disciples – the Pythagoreans who were looking for the secret patterns and laws that govern the universe.

It is interesting to see how, for example the Pythagoreans used one of the five platonic solids The Dodecahedron. Each facet of a dodecahedron is actually a pentagon/pentad. The pentad was so revered to early Greek philosophers and the disciples of Pythagoras that it’s construction and it’s divine proportions were kept secret. The pythagoreans used it as a symbol to recognize one another.They learned it’s relation to the Divine Proportion (The Golden Mean) which is one of nature’s basic mathematical/geometrical laws, and they discovered how this proportion affects the human psyche (we respond/react to this proportion as harmonious and beautiful with a deep tranquilizing effect).

Plato and Pythagoras shared a mystical approach to the soul and its place in the material world, therefore looking for the way the Prima materia – the primitive formless base of all matter took form and became the universe. The Metatron’s Cube is just that secret key… 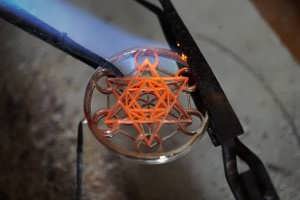