Working on a Star Children pendant which will be set with a genuine tektite.
http://www.ka-gold-jewelry.com/p-products/star-children-s-g.php

This is the mirror image of the stone carving from the Mayan site of Izapa, Stela # 25. The World Tree sprouts from the body of a caiman with the Celestial Bird perched on top. The shaman on the left is holding a power staff through which he communicates with, and probably is manifesting, a glorified ancestor. The Image of the Mayan World Tree is an accurate depiction of the Ceiba Tree with it’s bottle like trunk covered with thorns which reminded the ancient Mayan people the body of a crocodile. The crocodile tree became a symbol of the cosmos or the Milky way and the reason that I chose this symbol is because it is one of the first human symbols of the cosmos and because we are all eventually Starchildren. Every atom in our body came straight out of the furnaces of long forgotten supernovas in the far regions of space.

This is a powerful symbol because it actually depicts the evolution of the cosmic consciousness – it shows the human being, the starchild looking and trying to understand itself – the universe. 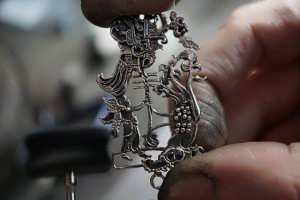