This pendant was designed by Joe Zastrow who won David’s jewelry design contest of February-March 2007. It contains one of the methods to sketch the Golden Mean of Phi (1.618….). It also contains (on top) the Greek letter Phi, representing the divine proportion.
Phi is a constant value which is even more mysterious and profound in its implications than pi (3.14…). Like pi, phi is a number with no arithmetical solution – The decimals just keep on going into infinity without ever repeating themselves. The unique thing about this number is that it can be found incorporated in all known organic structures: From the bone structure of human beings; through the seed pattern of a sunflower; to the spiral of a sea shell, the phi proportion is there, underlying all biological structures, seeming to be a geometrical blueprint for life itself.  Plato went so far as to call the phi ratio the “key to the physics of the cosmos”. 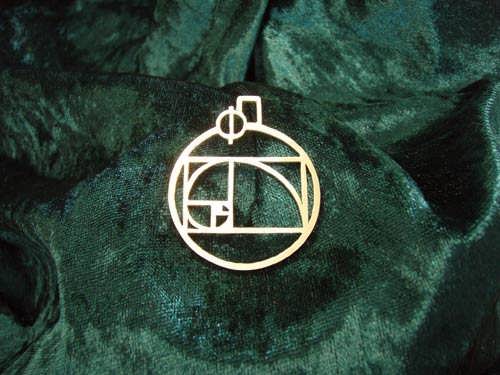