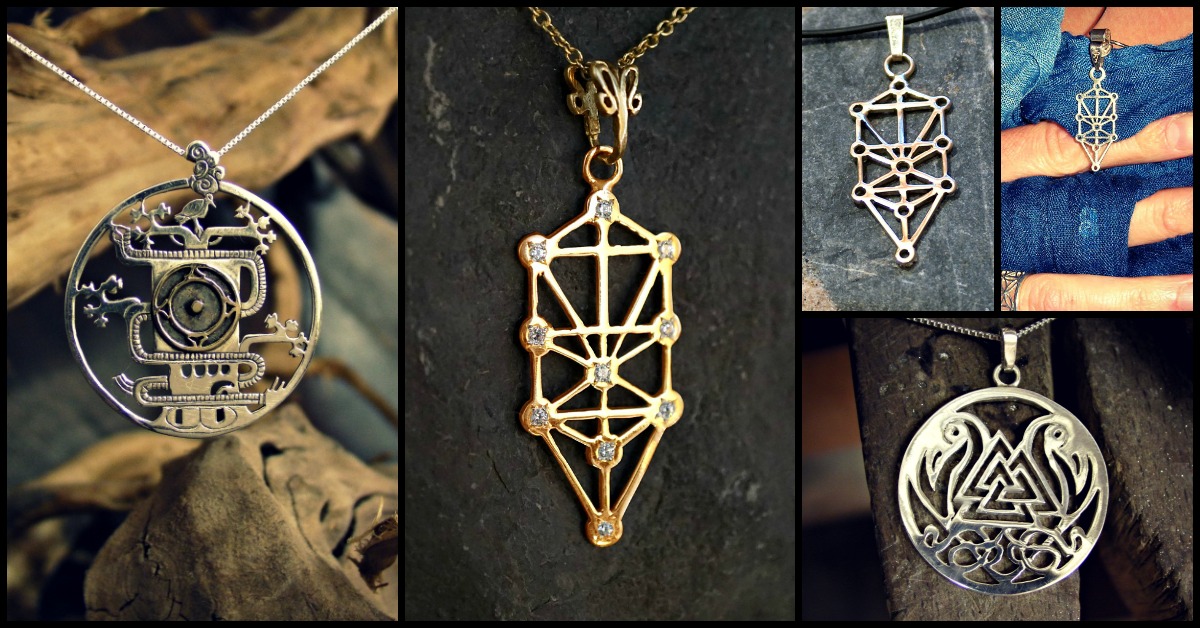 The Tree of Life is a widespread concept that appears in many traditions and mythologies. It appears in Judaism, Christianity, Islam, Buddhism and in many ancient traditions. The tree of life is an ancient symbol of the connection between all forms of creation.

The tree of Life Pendant is quite open for interpretation and many artists around the globe have their own versions of it, normally in the form of a regular tree with various design elements.

The artist David Weitzman has a variety of implementations to the tree of life pendant, some based on the Kabbalah Tree of Life and others based on ancient traditions like the Mayans and Vikings. David also chose to have a personal take on the tree of life pendant in the form of Tree of Love to show that the concept of connection between all living beings is actually the concept of love.

Below we will share with you the collection of David’s tree of life pendants in its various forms.

This is a Sacred Geometry and Kabbalah Symbol of Unity and Divinity
The symbol is based on the Jewish Mysticism called kabbalah. It is a representation of the thirty-two paths comprised of the ten sefirot and the twenty-two (Hebrew alphabet letters) paths through which they run. The Tree of Life describes the descent of the divine into the manifest world and methods by which the divine unity may be attained in this life.

The symbol originates from the worldview that aspires towards logical order in the chaotic Universe. This understanding creates an ordered microcosmos where there is a defined center. From the center, we can turn to each of the directions in search of knowledge, wisdom and new discoveries. However, outside of this world, there is chaos, night and death.

The image of the tree represents the symbolic axis that unites the three plains: The sky (branches), the earth (the trunk) and the lower world (the roots). Every object that is hanging on the tree represents the tension between the lower world and the upper world and in this way turns into a very strong symbol of the storehouse of knowledge and wisdom.

The Mayan world tree pendant is available in Sterling Silver, Solid Gold (14K/18K/22K) and a combination of Silver and Gold.

The Viking’s representation of the tree of life.
Odin’s knot symbol represents the myth of knowledge discovery by Odin. Odin was hanged from the world’s tree – “Yggdrasil” for nine days and nine nights and after that received the knowledge of the nine worlds.

The Tree of Love Pendant

This design is a wonderful mix between the Tree of Life, Yin Yang and the perception that Love is the glue that connects us all. The Yin Yang is an ancient Asian philosophical outlook that sees polar opposites or opposite powers as powers that complete and define each other. Opposite powers constitute a point of relationship and they complete and balance each other. Every power grows from the other, for example, light and dark or male and female. It is also interesting to see the Yin Yang representation here as the upper world and the underworld of the tree of life.

In this creation, David took the concept of the tree of life and implemented it to our current time as a wake-up call to treat our earth better. The design has the tree on top and on the bottom a smaller medallion on which is engraved the question in Hebrew – “will you change it?” (“HATESHANU”).